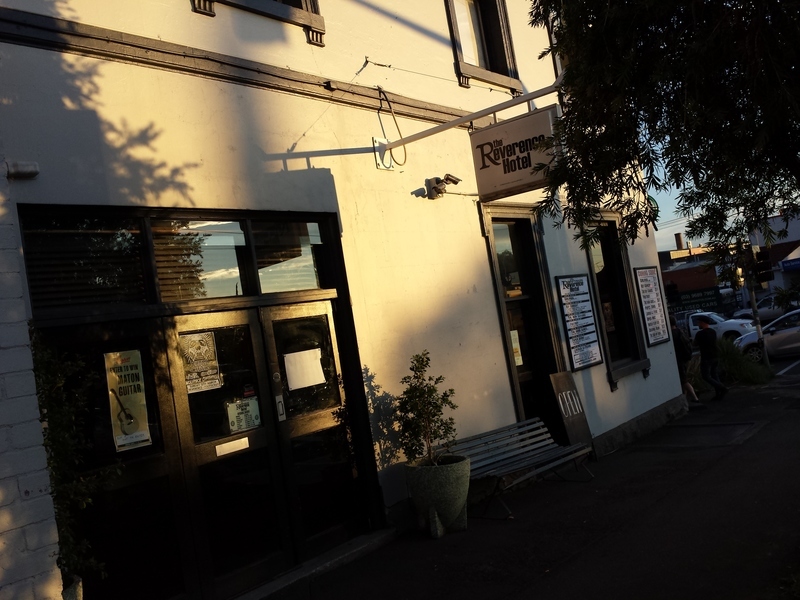 Looking at the Zomato reviews around Footscray, I didn't expect to find such a highly rated hotel. By hotel, it infers pub, and good pub is hard to find, great pub food is rare. Considering it was the day of the Lunar New Year festival (which I had attended for lunch), I didn't feel like going back as the food there didn't inspire me (other than the banana fritter which was excellent). The reviews seemed to summarise the food as vegan/vegetarian Mexican. Interesting and relatively healthy?

Walking into the Rev, I saw several band members leaving carrying their instruments. Unfortunately I'd missed the live music which seems to be in the mid and late afternoon.

There's a solid selection of chilli sauces, of which the MHS chipotle & cayenne was my favourite, followed by the smoke jalapeno. There's also the widely found El Yucateco red and green versions but I find them a bit too spicy for my enjoyment.

- Street Style Corn (chargrilled corn on the cob with creamy dressing, the Rev's spice mix & lime) $6 - nice juicy and slightly charred corn with a paprika spicing. I think I still prefer the excessive coatings from Mamasita or my own homemade Thomasina Miers-inspired version, but this was very good;
- Nudist Burrito (spinach, tomato & red onion salad dressed with chilli & lime with housemade mock "pork", served with guacamole, salsa, pepitas, crunchy tortilla strips & chipotle lime mayo) $18 - I was reminded why a non-vegetarian would ever eat mock pork instead of the real thing. There was effort put into making it look pulled but the texture and flavour was clearly vegetable and did not appeal to me. The tortilla strips were very nice though;
- Smoky Tofu Quesadilla (in a flour tortilla with refried pinto beans, cheese, corn salsa, spinach & homemade BBQ sauce, served with salad & the Rev's spicy fries) $16 - I don't quite remember what the tofu burrito at Trippy Taco was like, but this was quite excellent. The tofu wasn't very "smoky" at all, but the overall flavour of the quesadilla with good particularly topped with chipotle & cayenne sauce. The fries were hot and crisp with a strong smokey paprika coating. The salad of the day had radish, charred corn, Spanish onion and greens which complemented really well.

This meal enforced a few things for me - there's good quality vegetarian in Footscray that isn't African, I shouldn't waste my own meals on mock meat when the real thing (or tofu) is available, I'll definitely be coming back especially considering how close and away from central Footscray hustle it is.

Next time I would order anything I haven't tried yet with the exception of mock meat. The list include empanadas, mesquite fried chicken, nachos, fish or pork belly tacos, beef burrito or Mexican beef pizza (I wonder how hot the Napalm Chili Napoli sauce is). I'll also try to catch some live music although I'm unsure if it will really be my taste... 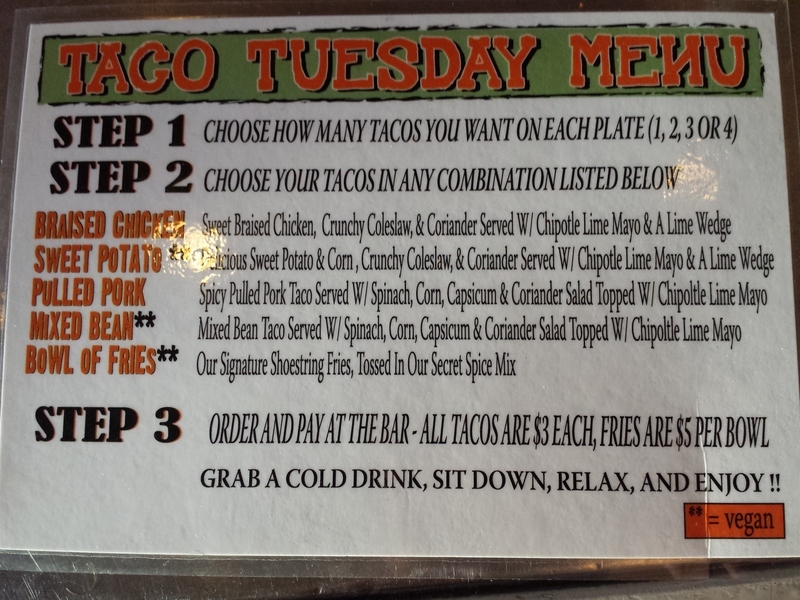 Tuesday night is taco night at The Rev. It seemed like a great idea to avoid cooking for an evening. The place was bustling with everyone ordering their tacos and drinking cheap cans of beer.

I'm not sure if the Tuesday tacos are specifically different to usual, but they didn't have the ones I was most looking forward to - beer battered fish, tofu or slow cooked beef. Nonetheless there were 4 decent ones listed on this evening. My favourites were the mixed bean and pulled pork. I thought the chicken was ok but thought the sweet potato was very plain. Of course the MHS chipotle & cayenne lifted all the tacos but the mixed bean and pulled pork had the best overall tastes.

Once again the fries were very tasty and a good snack for contrast.

This could become a regular Tuesday event for me.