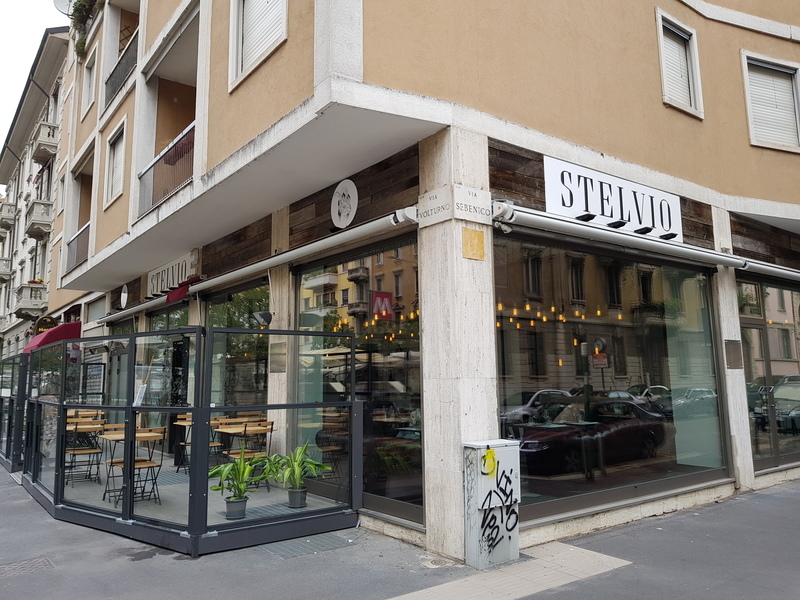 We were looking for a more "hipster" area that included vintage shops. There wasn't much to find on Google searching but the area of Isola sounded worth a visit. We walked past a train station, little park areas, new constructions with creeping vines and through a street food produce market.

Stelvio was a funky cool looking corner place with a pasta menu that appealed which I think lured us in from the pictures of hands kneading dough. It must be fresh and homemade right? I was so so tempted to try the Risotto Alla Milanese con Ossobucco but felt into pasta this occasion. Because many of the pasta types had names I had never heard of before, the fascination helped me decide.

- Pappardelle al Funghi Porcini €12 - this fat flat sheet pasta was very al dente and served in a mild savoury sauce complemented by the soft spongy textures of the mushrooms;
- Casoncelli alla Bergamasca €13 - pasta stuffed with a beef and topped crispy pork and sage. The umami was strong and using the half eaten packages to scoop up the buttery sauce was a tremendous delight.

However if I was to visit Isola again, I'd try La Cantinetta which we walked past when exploring the area later. That place was in a courtyard plaza and bustling with patrons. It looks worth a good go. 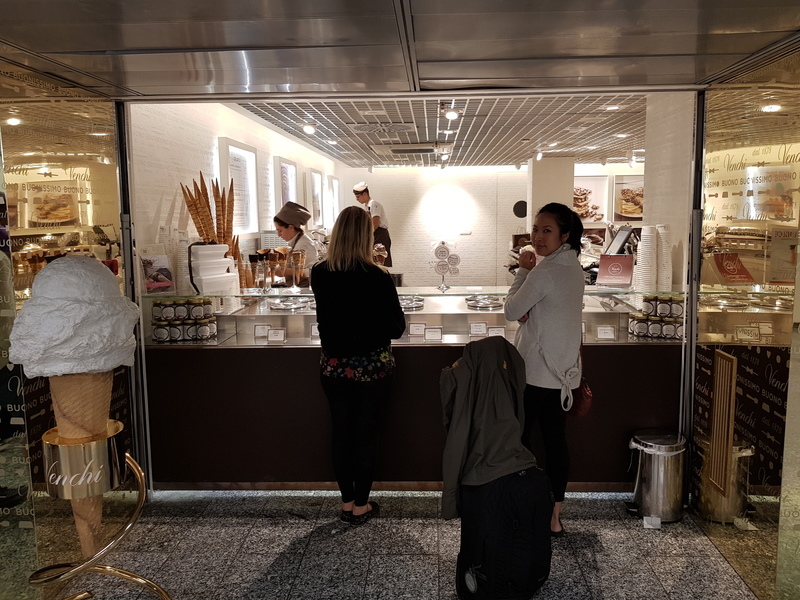 Running late to catch the Malpensa train during a pouring wet afternoon meant my dreams of a final gelato were dashed. Almost! Malpensa Airport T2 has a quality gourmet gelato place which also has chocolates and other sweet treats. But all eyes were on the gelato. It's the first I've seen in an airport anywhere and the use of relatively normal (ok maybe slightly higher than town) pricing is appealing too.

The cones offer a freshly made chocolate coat with nuts. For 2 flavours this is €4.5. The pistachio is nice but could be a bit stronger. Tiramisu had a good clean flavour and was nice.

It's at an airport and well within the realms of what would be great outside of Italy - I can't complain. 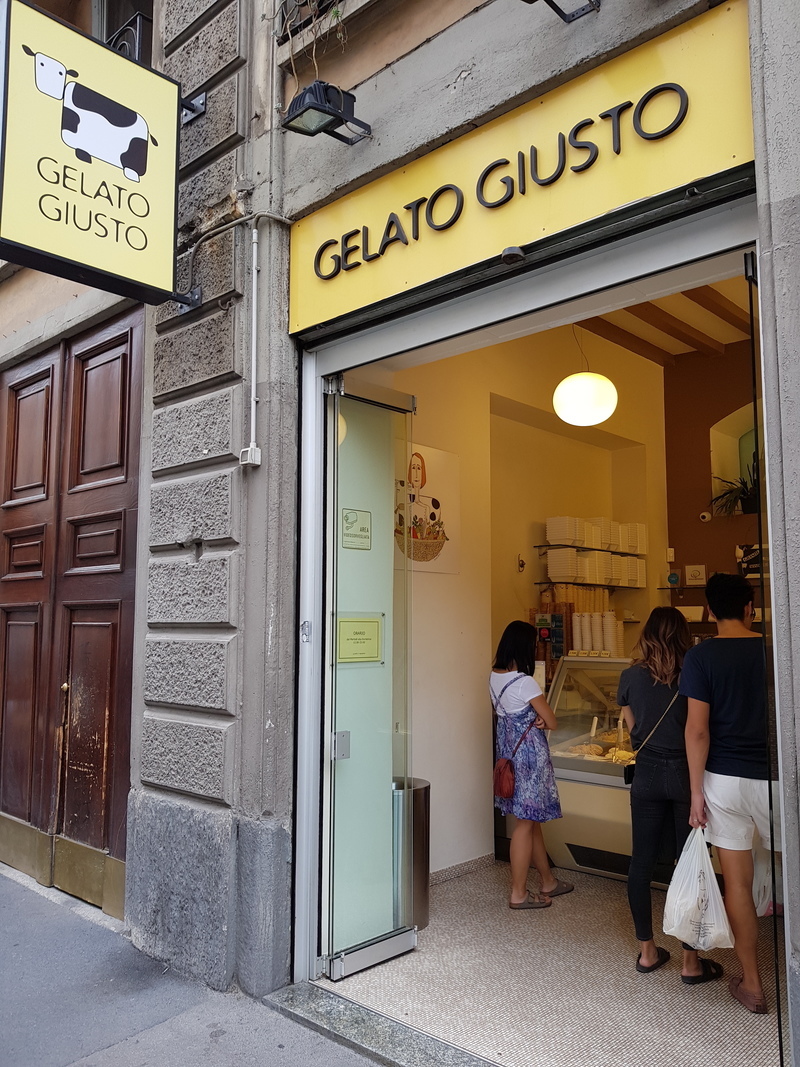 The little cute cow welcomes you into this gelato place. Inside are a host of flavours with incredible unrivalled potency.

The pistachio is intensely strong. I'm a pistachio connoisseur but this was practically too much. My brother pointed out that the flavour was so strong it was salty to the point of not being sweet at all (I like minimal sweet but this was almost no sweet) and he is right. I like natural rather than salted pistachios as nuts and so I think this is why the flavour wasn't for me.

Yoghurt was an excellent creamy thick version of just that - yoghurt flavour.

The quality is excellent and the flavours are strong. I think I'd have to try the banana/hazelnut/chocolate one next time. 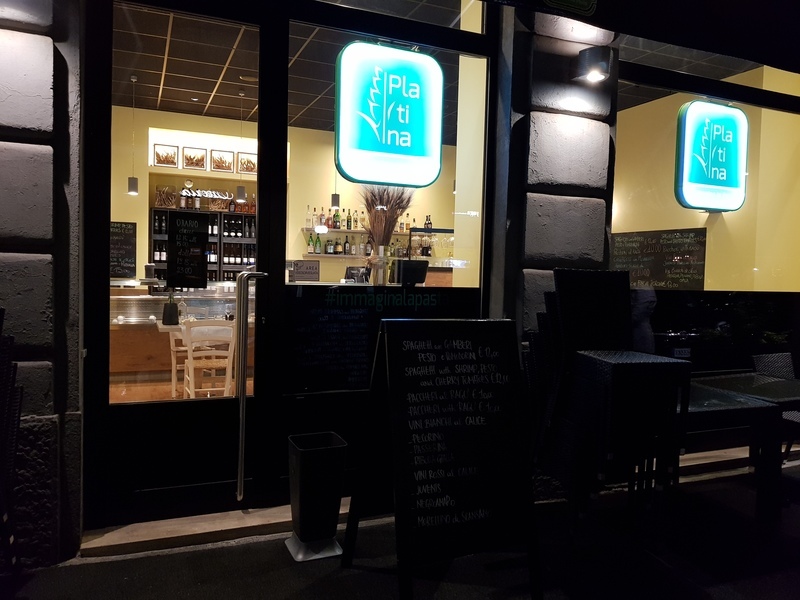 My brother raved about a fresh pasta place he had been to the night before. Even with Milan's choice of places, he was keen to go back again and almost seemed disappointed when we weren't able to. Considering he eats about 2-3 pastas at each restaurant, he does have a decent radar for these things.

The menu and food reminded me of the other incredibly good fresh pasta place in Puerto Iguazu (http://eatlikeushi.posthaven.com/la-mamma-pastas-and-salsas-puerto-iguaza-11-2016) - the only restaurant I can say I visited 3 times in about 2 days (sure there isn't much other choice in that town...) but still. How would this compare?

There's fresh pasta waiting to be used. The giant tubes and a few others are types I haven't really seen before let alone available in a restaurant outside Italy.

- Special of Spaghetti with scampi €15 - thick al dente spaghetti in a dense tomato based sauce which had the acidity nicely cooked out of it with whole scampi was quite good. The quantity of spaghetti was generous;
- Parsley Paccheri (with squid, cherry tomatoes, zucchini) €10 - big tubules of green pasta in a delicious savoury squid sauce with the vegetables and squid adding flavour and texture.
- Homemade tiramisu €5 - a creamy coffee delicious light version.

The quality is definitely there. I could easily have eaten a whole extra dish. Maybe next time. With my brother. 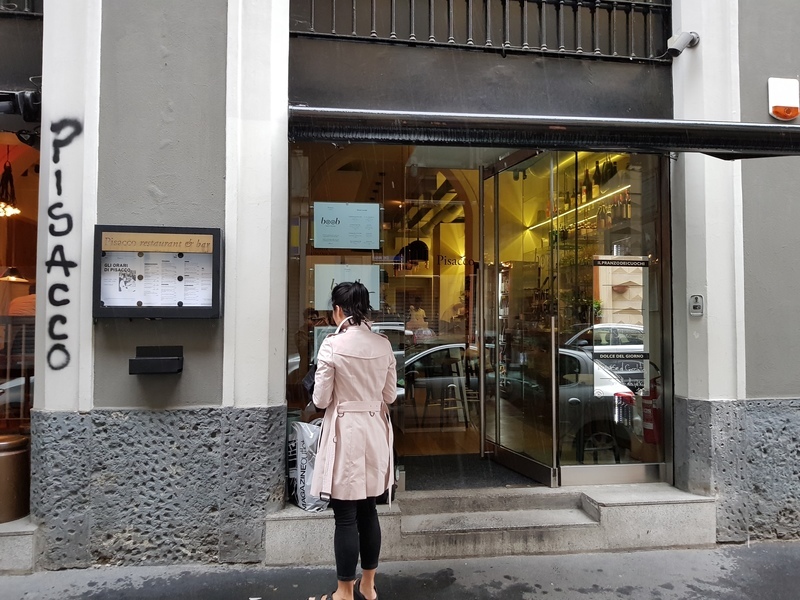 There were two particular dishes I wanted to eat in Milan. I'm not sure why I didn't try them last visit but risotto alla Milanese and cotoletta were high on the list for lunch before leaving. The north of Italy is more known for rice than pasta although I'd dare say they likely most places in Italy would do both very well. I'd read quite a few reviews and recommendations for both dishes. Unfortunately on a Sunday, many of these seem to be closed such as Trattoria San Marco, Trattoria del Nuevo Marcello and Ratana. In a convenient location close to Porta Garibaldi to get the Malpensa train afterwards were two options: the more traditional Osteria Brunello and the more modern Pisacco.

I arrived at Brunello in the drenching rain at 1420pm. Unfortunately the place is listed to close at 1430pm and even though there were tables ordering their meals, they refused to serve me. Quite blunt and rudely but if they aren't making money from me I suppose they don't have to be nice. Shame, since it's one of the few places that has a good cotoletta and also the risotto on the menu.

Nearby Pisacco was more accommodating and the interesting wall decorations including a repeating lights screen with two little figurines provided some atmosphere. It's a more modern type cafe and so the food presentation and smaller serving size represent this as compared to the more traditional ones.

Some complimentary strong olives, small nuts/kernels and slightly crusty bread slices were served along with an order of pear juice of the day.

For the price we left feeling somewhat hungry. I guess that's what you pay for in modern places. If time permitted I would have added a salad or a meat/seafood main. I'd happily go back. 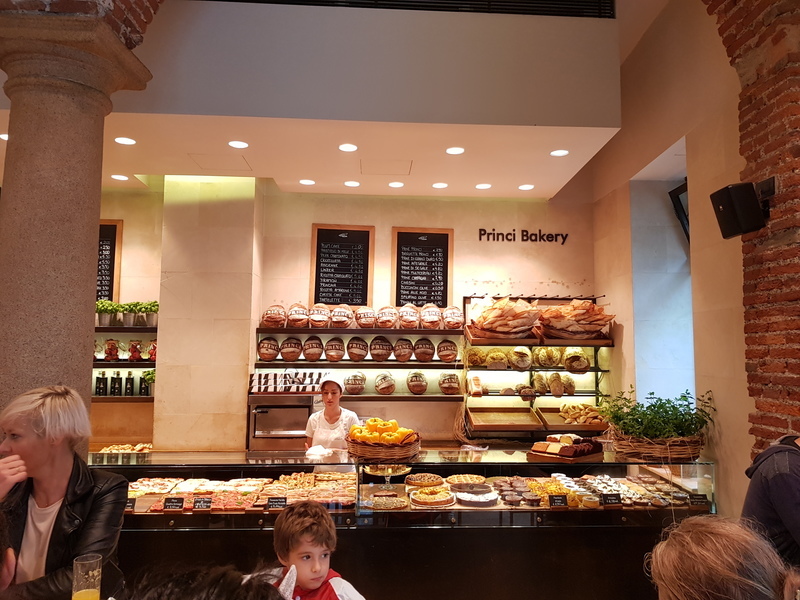 In amongst the darting rain on a Sunday, a trip to the bakery was on the cards. Princi was conveniently located between Porta Venezia and Monte Napoleone and marked on my list of to-eats.

It's a nice bakery with a counter for the breads and another for coffee and salads.

The pizza and focacias are thicker crust than your standard Italian. The oils have leached into the crust creating a nice crispy, oil-textured base topped with flavours of choice. It reminded me of the delicious deep-pain of NYC or more recently in Salamanca (http://eatlikeushi.posthaven.com/al-cuadrado-salamanca-03-2017). 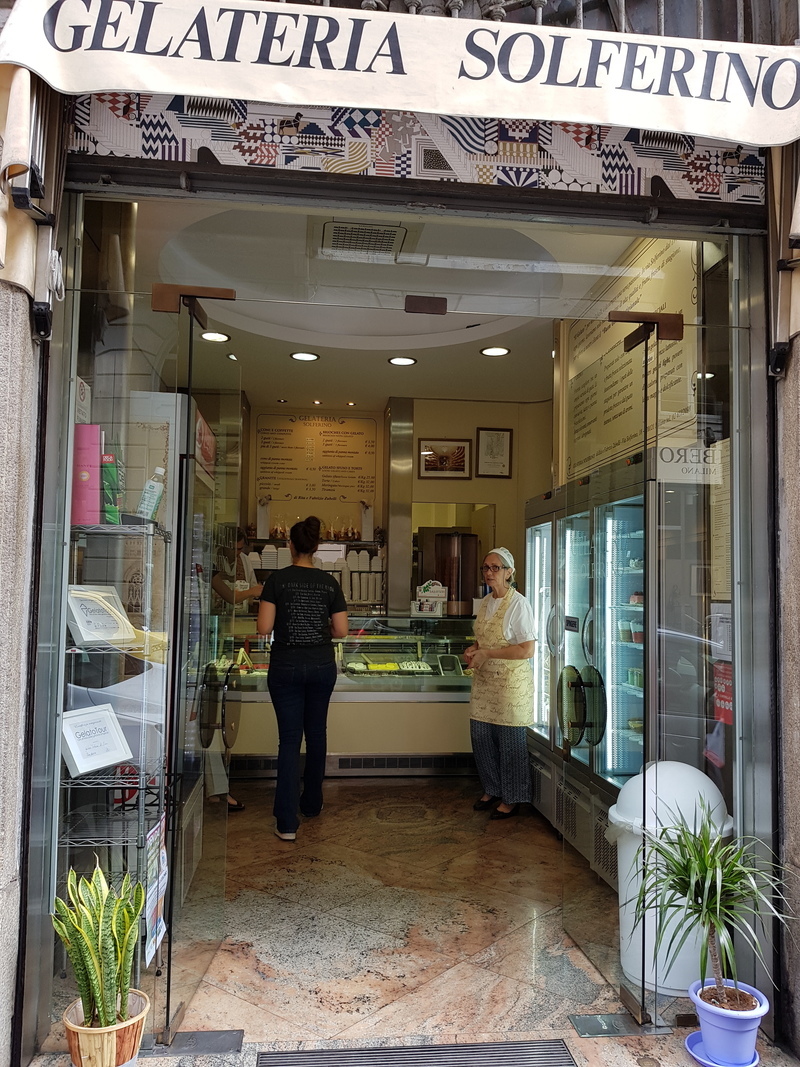 A casual wander from central up north to Brera led to a quick Google Maps search for gelato. It would be the first of the trip and luckily Milan seems to be full of decent options. This was run by some lovely elderly Italians who were only too happy to share their creations with us. The colours of the selections were deep and elegant.

Pistachio was a lovely light brown colour full of pistachio flavour with a light sweetness complementing. The fig was full of fig seeds for texture and a light fruity creation from blended figs. 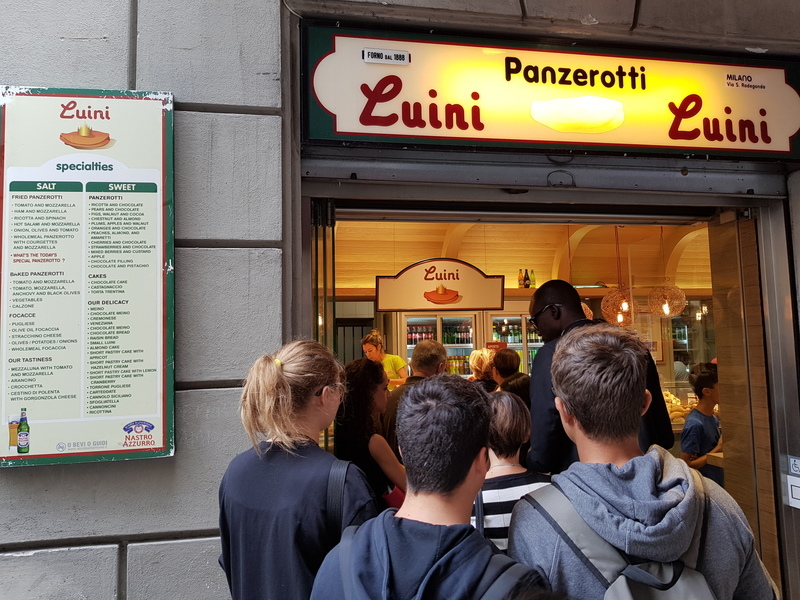 It has been over 5 years since my first (and what I thought would be my last) trip to Milan and Luini (http://eatlikeushi.posthaven.com/panzerotti-luini-milan-07-2012). It was one of those deepfried snack places especially good for a quick stop. Long gone are the days of friendly staff and the ability to look through the bakery. This time I am met with a queuing crowd to outside, a bouncer moderating the line, and one of the female staff shreaking that "photos are not allowed!!!". It's a bakery. Calm down.

The prices have gone up minimally (€2.8 from €2.5) in 5 years which isn't bad at all. The fried versions are still softer, taster and unhealthier than the baked ones. The fried ones remind me of Chinese fried mantou bread or doughnut, and have a lovely soft and delicious dough coating. The fillings are tasty and perhaps could use a little more to balance the fried bread flavour. There's no danger of the filling spilling over.

I can't imagine I'd ever make a third trip to Milan, but despite the change in crowd and service, I'd gladly come past again for a bite. 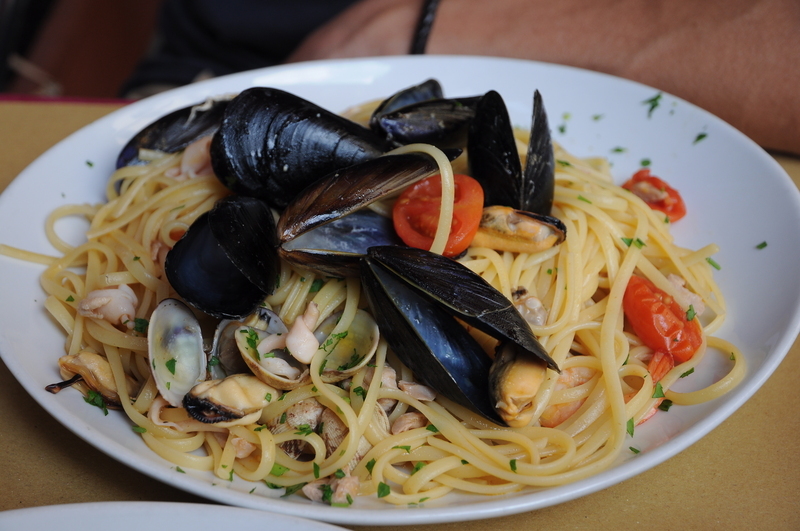 On a small street opposite a Punto supermarket (which stocks an enormous packet of chips) is Momus. It isn't much to look at but has reputation for pizza, pasta and risotto. For the last meal on this extraordinary Italy trip, taking things back to basics seemed like a fitting farewell.

After this was a pleasant walk back, a trip to the airport, and Ryanair luxury back to Stansted. Until next time Italy. 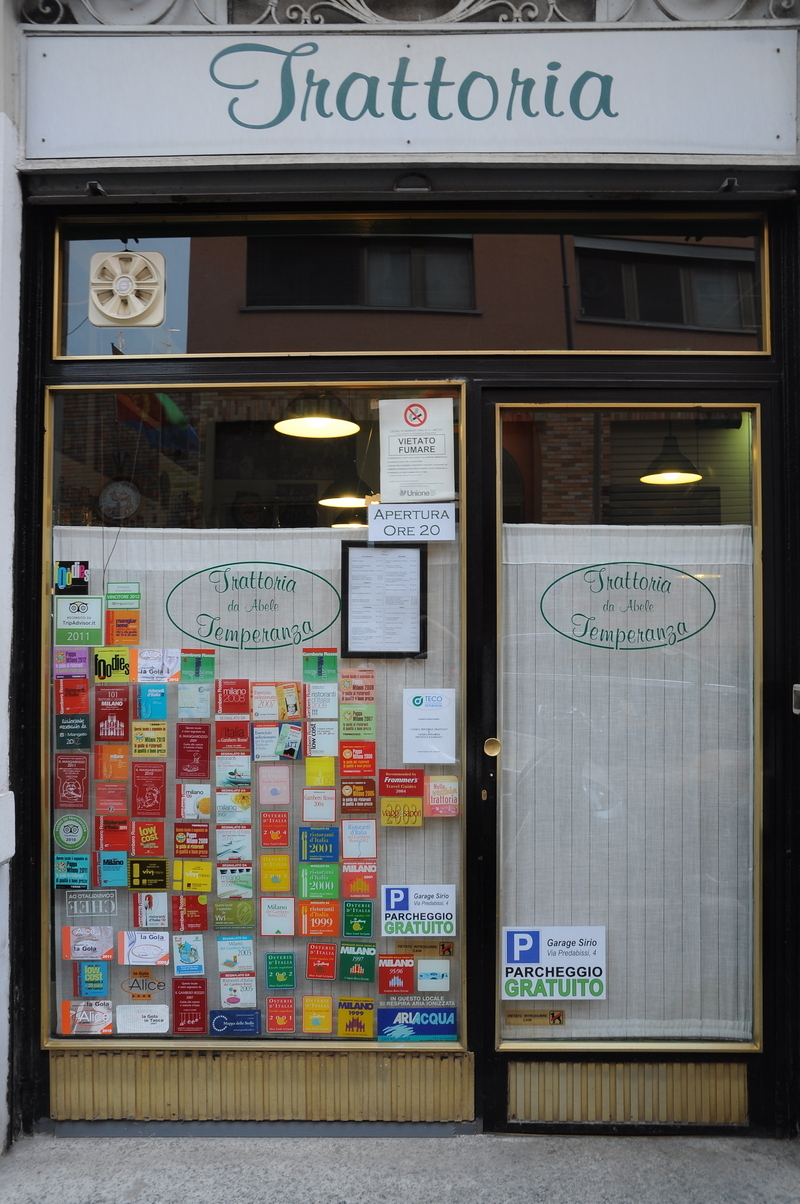 Whilst living in London I subscribed to one magazine only - The Lonely Planet. Even though I'm not a big fan of LP guidebooks (as I much prefer Rough Guide to travel with and annotated personally from internet research), the magazine is one of the best in the world for a reason. The stories, photos and travel lust it inspires is better than almost any I've seen, and more budget friendly for typical European travel (as opposed to me other favourite Travel & Leisure which is much more flashpacker or hotel style).

The LP magazine once had a short travel card for Milan where it recommended Temperanza as *the* place for risotto, with dozens of varieties, of which only a certain few will make the menu each day. It's a generalisation that north Italy is more rice based than middle and south which are more pasta based. It didn't take much convincing to trek all the way up far north-east Milan to visit here.

The risotto was perfectly cooked and the flavour combinations were different. I'm not sure I'd say they are the best risotto flavour combinations I've eaten (probably because I prefer strong seafood flavours) but the creativity is certainly there. The menu reads like a gourmet dream with dishes I didn't see anywhere else in Italy. Definitely worth a visit.