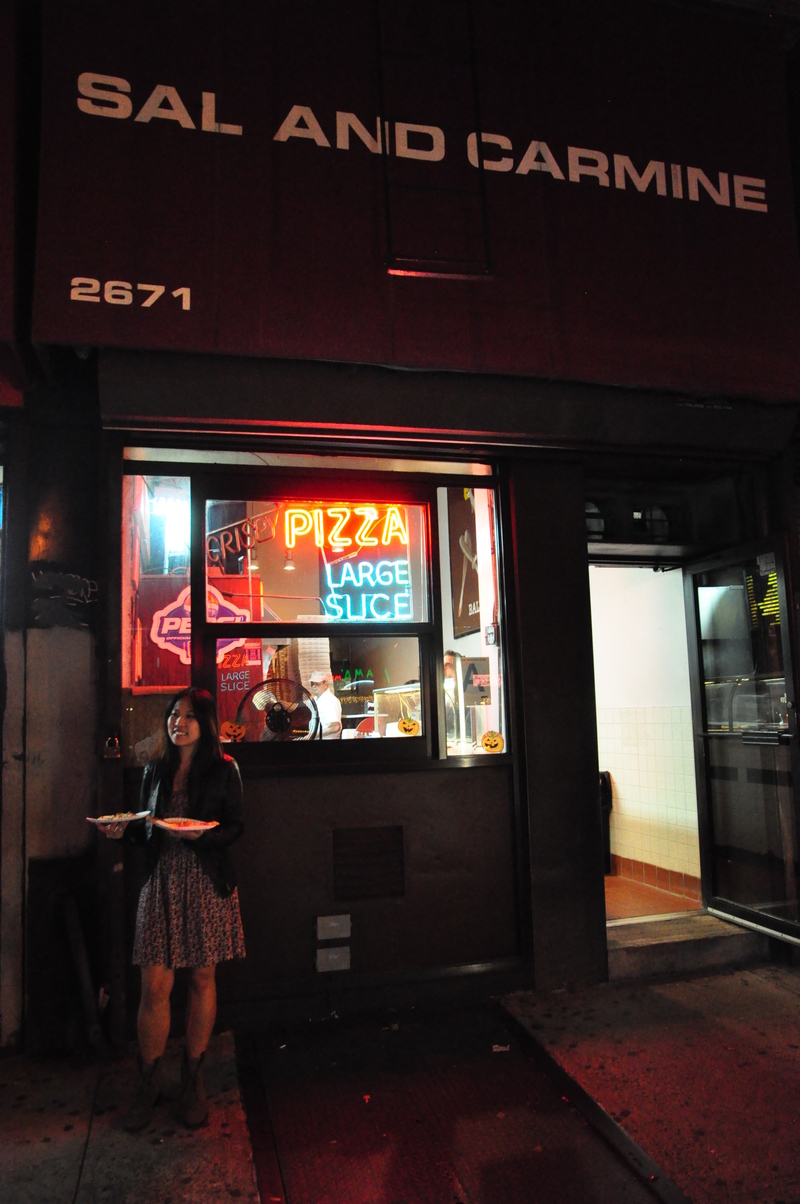 I'd read a lot about NYC pizza, particularly that the most well known ones had long queues. As game as I was as a tourist, given there was only a few short days in NYC, queueing for pizza had to give way. Luckily a well reputed one was very near the hostel on the UWS. After arriving very late, we went the first night and tasted what I associate now as NYC pizza - large slices, thin crust, but very flavoursome/salty.

On the last night in NYC we went back. Just because we couldn't decide what to eat after some decadent meals already. 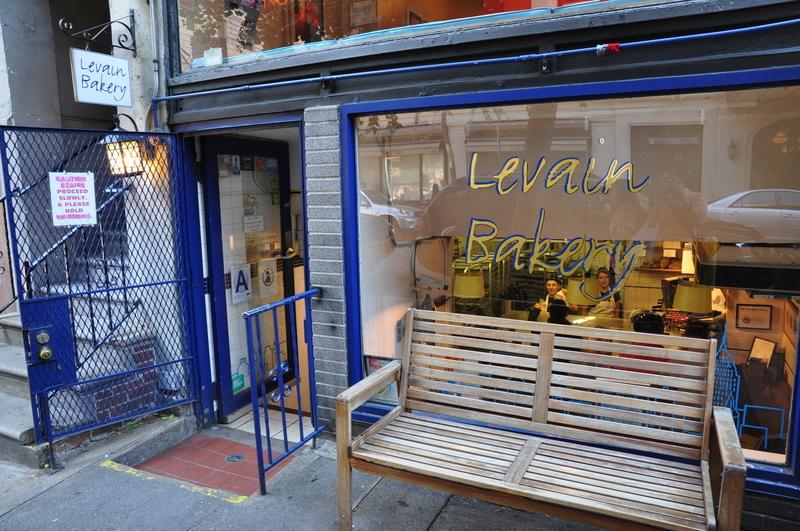 A famous bakery for cookies near Central Park. Quite simply the best cookie I've ever had and 7 years later in 2018 I was delivered some and they are still as good.

Maintaining their firm coat and soft moist centre even many days later. 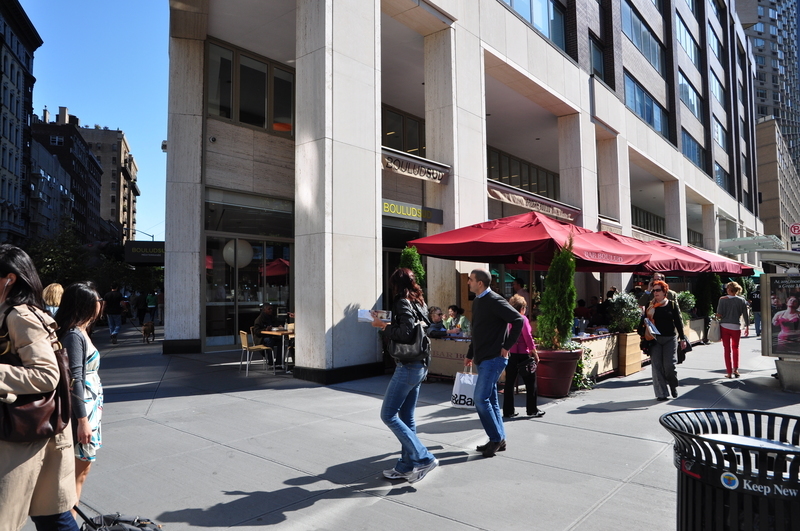 Perfect for food to take for a meal in the park. 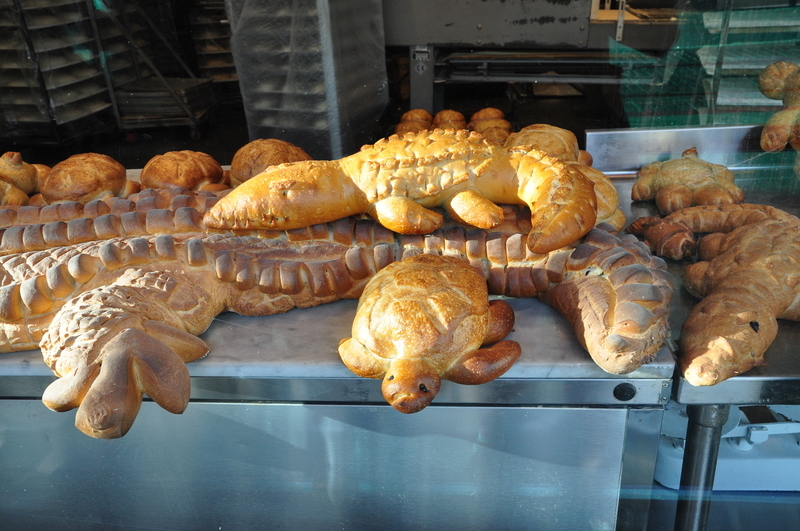 It's been a long time since I actually visited Boudin. In researching my food venues for the trip, Boudin and their chowder in sourdough was extremely highly regarded. The first Boudin I walked past was at Fisherman's Wharf, complete with the artistic and impressive animal designs in the shop window.

I was enroute to dinner at Ferry Plaza so didn't stop in, but managed to sample Boudin's fare the next day (at a location that I can't precisely recall).

The sourdough revolution hit Melbourne around the time of extreme brunch cafe culture circa 2009 and I was there to embrace it. It was a farcry from the supermarket sourdough I was made to eat back in the early 90s when my mum tried to take wheat out of my diet (N.B I'm aware now that sourdough is still wheat based). Of all the types I've tried around various cafes and bakeries in Australia, none has yet surpassed my experience at Boudin - the crusty bowl exterior, the soft spongy bread and the unmistakable tangy sour taste that I search for. Other than the bread, the chowder isn't bad either.

A fantastic dish and one I look forward to revisiting. Next time I'll be sure to take some bread home too. My sourdough journey continues. 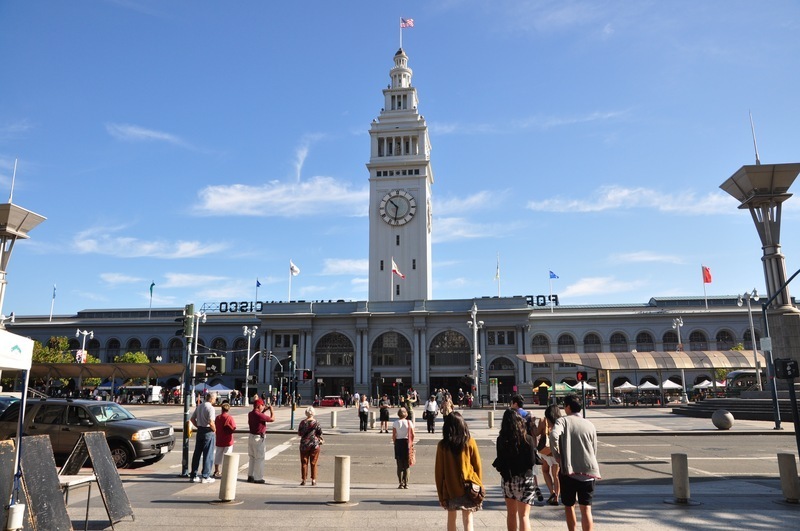 The Ferry Building in San Francisco seems to be where all the city's best food congregates under one roof. In only a few days, I spent time at the regular store inside (think bakery, mushrooms & truffles, fruit & vegetables, meat, coffee), the restaurants (Hog Island Oysters, The Slanted Door), and also excitedly the Ferry Plaza Farmer's Market.

Occurring every Tuesday & Thursday (1000-1400) and Saturday (0800-1400). Tuesday is supposedly quite limited, Thursday has the addition of hot street food vendors, Saturday is the biggest with restaurants also attending to serve food.

A lucky Thursday allowed us to sample Korean tacos, pizza and the most wonderful food van called RoliRoti. After a short queue, a RoliRoti sandwich with rotisserie chicken or pork with cooking meat juices soaking into the bread was incredible. The rich strong flavours enticed us to consider joining the now-immense queue of about 45mins just to have another one... maybe next time. 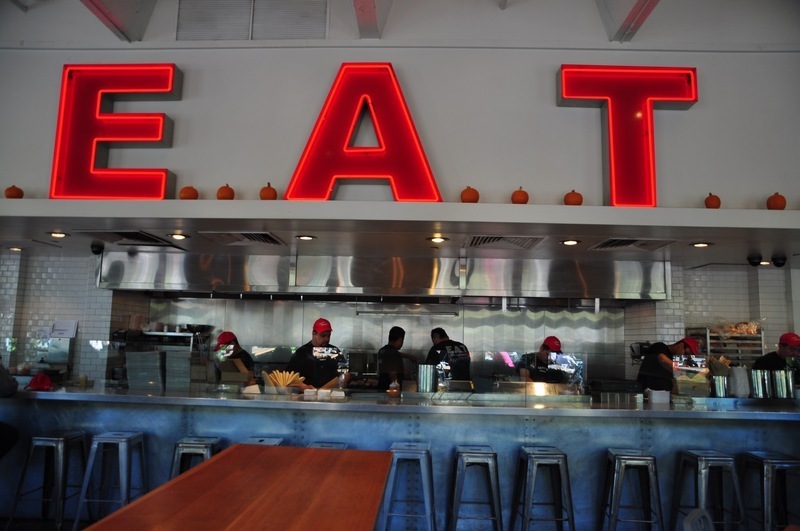 Before hitting San Francisco, I carefully read through the recommended 100 food items to try. Obviously getting to all of them was never going to be a goal, but picking the select ones that had the most promise gave me something to look forward to.

Gott's Roadside is a roadside diner-designed place, expertly located at the Ferry Building, where all good food in San Francisco seems to be.

The Ahi Tuna burger was the item on my prowl list. It ended up being a lovely fat slab of seared sashimi-grade tuna, served with coleslaw in a soft bun. It looks sensational and tastes very good. I felt it was missing something (unsure what, perhaps something to kick the flavour up) to make it great, but I'd happily go back for it. 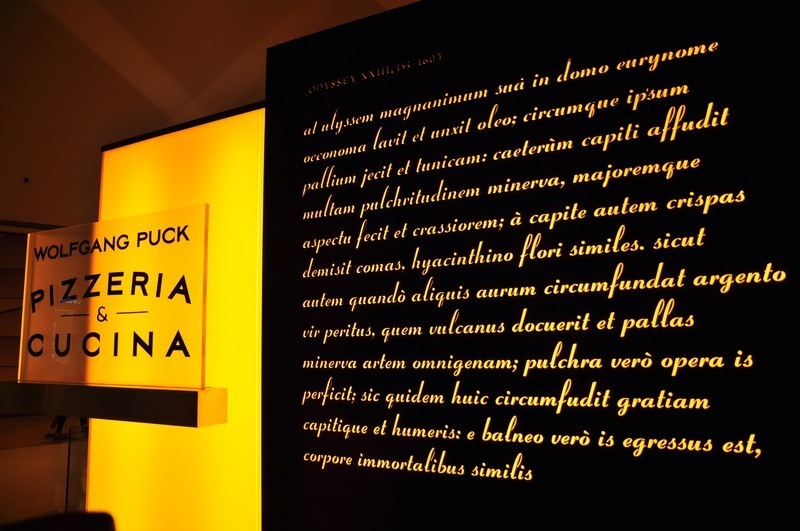 For some good standard Italian staples, Wolfgang Puck Pizzeria & Cucina inside The Shops at Crystals. 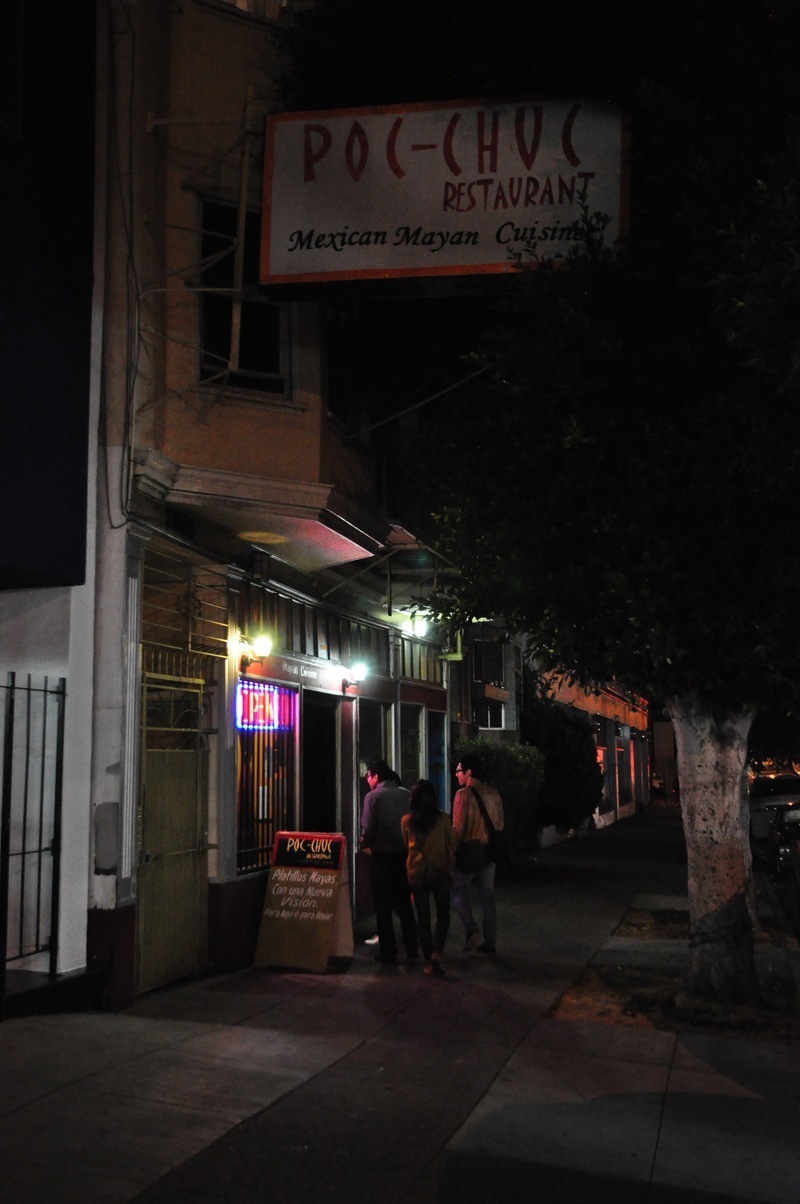 One of the recommended districts to visit in San Francisco is the Missions. It is a poorer area that is known for good ethnic food, exploration during the day, and perhaps a shadier atmosphere at night.

In order to get there from the central and ferry parts of town, we decided upon the local bus. It wasn't the cleanest idea, with it being quite rundown and obviously catering to the more forgotten people in San Francisco. I didn't mind it, but some of my less adventurous travel companions felt a little uncomfortable. I leeched onto some very inadequate Blackberry internet to find a recommended Latin American restaurant for us to try. After a short walk around we came to Poc Chuc, a Mexican/Yucatan restaurant sitting all by itself in the quieter side of the Missions.

Each dish was delicious and what I imagine true authentic Yucatan food to be. There was no frills, just strong flavours and simple cooking. Horchata lovingly washed down all the flavours.

After dinner I took the bus. The others took a taxi. 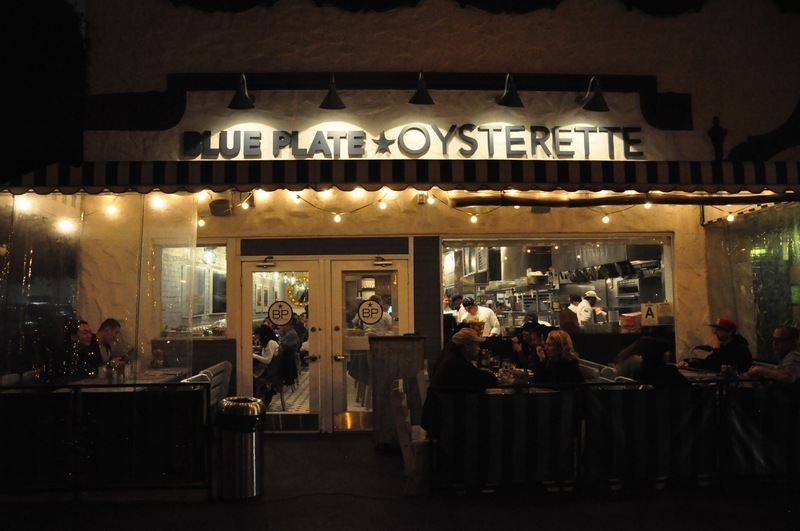 In an unexpectedly ideal location in Santa Monica along Ocean Avenue facing the beach is a restaurant that served me some of the best seafood dishes I had in the Los Angeles and USA. I was lucky enough to be staying in an apartment around the corner from Airbnb (not the best place, but a great location with a window directly out to Ocean Avenue and the water.)

I saved this place for my last night, and between 4 of us raided the menu of their seafood joys.

What a fantastic meal of seafood flavours in different cooking methods and combinations.

Next time I would order the Lobster Mac & Cheese and Bouillabaisse particularly of the dishes I tried. I'd order one ceviche since they had the same marinade base (whether you prefer the more traditional Peruvian fish or the mixed shellfish version). The a la carte
has plenty of other options that would be worth feasting on - baked clams, crab dip, Main soft shell clam steamers, fish tacos, lobster roll, and if you're up for meat, even the kobe beef dog could be a winner. 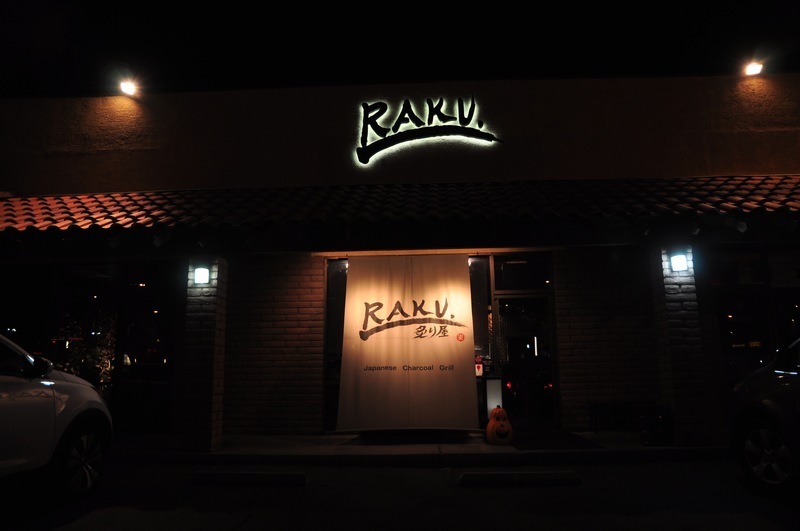 Finding a recommended restaurant in Las Vegas is difficult. There are the buffets, the Michelin restaurants and the remainder of the strip with their supply to the mobs. A little bit out of the way of the strip is a Japanese grill called Raku. Be careful when taking a taxi as most of them don't know where it is, even if you give them the address and will try to drop you well before the venue. When you get there, you'll know - it's a turn off into a small carpark leading directly to the front entrance.

There's the options of a la carte, a set course made from the menu items ($50 back in 2011), and a separate more expensive kaiseki menu of special dishes (probably more similar to traditional kaiseki).

Our group of 9 had the set course served to us in the private room. To my surprise we didn't actually grill any of the food, rather it was cooked in the kitchen then brought out to us.

Next time I would order the set menu with a large group, or from the a la carte for less. All dishes were very tasty and a welcome separation in cuisine and location from the rest of the Vegas monotony. There are some classic and some exciting selections that sound worth it like poached egg with uni & salmon roe, foie gras egg custard, uni & wakame soup, and green tea creme brulee.