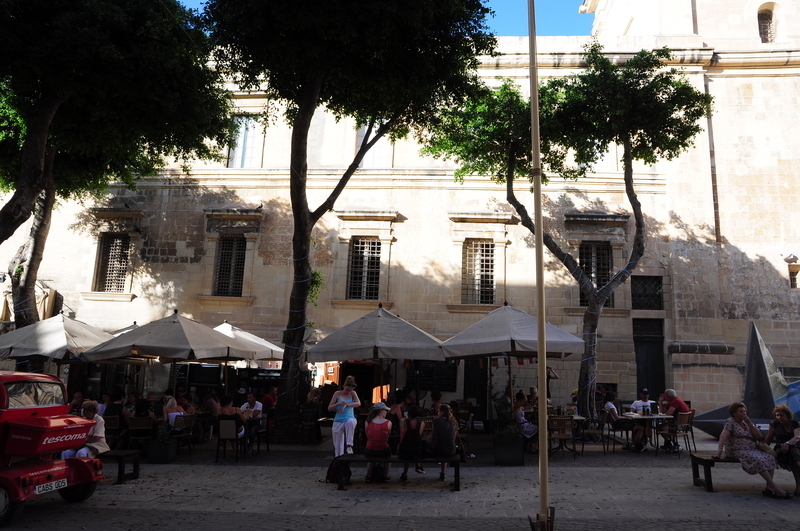 Wandering through the lovely town of Valletta in Malta, I had my usual list of places to try. Because it was an early evening, they were all closed. Searching for somewhere to eat, we came across many places in great locations all which looked too touristy to be decent. Eventually we settled upon Kantina Cafe located beneath a pretty cathedral (turns out to be St. John's) and a spot to watch people walk by and relax.

Exhausted we stopped here as the menu was nicely written on a chalkboard, the food looked good and it had a outdoor seating to enjoy the weather.

Since Malta has quality seafood given its island location, we naturally selected the dishes which highlighted these ingredients.

Ravioli (crab & lobster with prawn bisque) had a beautiful combination of flavours of all the wonders you'd expect from shellfish. Crab & lobster meat wrapped in delicate ravioli skins and soaked in a rich prawn sauce. Pasta is rarely this good.

Mixed Seafood Platter (mussels, vongole, king prawns, octopus, langoustines) served with a big bowl of fries was fantastic also. Butter, garlic and chives dressed the delicate ingredients and had me savouring every bite and licking my fingers at the end.

A great place to stumble upon. If you're in the mood, there is a cheap cocktail menu to help time pass peacefully.

Next time I would order the same two dishes. Rabbit is another popular ingredient in Malta, but I don't think it can ever beat good seafood. 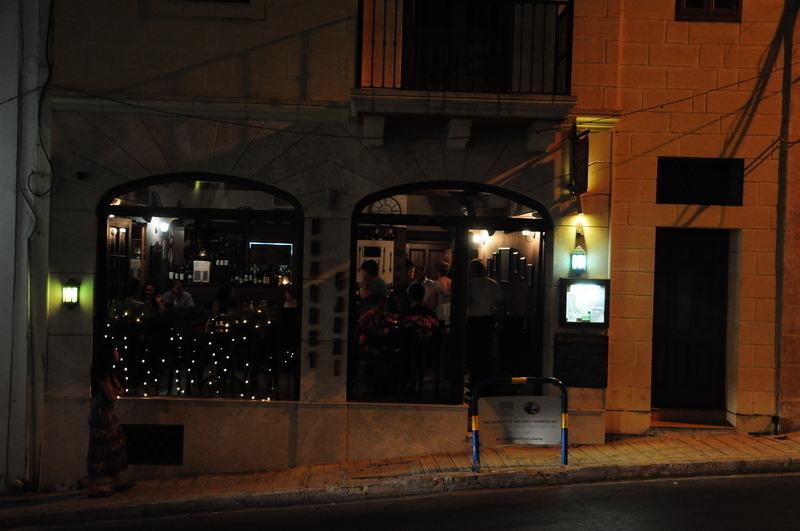 #1 on Tripadvisor for Mellieha and the whole of Malta is Bouqeut Garni. I thought a restaurant in Malta with a French name would be a slight risk but after a disappointing first night at the #2 restaurant in Mellieha this seemed like the only option for redemption. What a fantastic meal.

Located on a non-descript corner on the main room (which meant the unfortunate occasional raucous as local buses went by), the restaurant comprises a local family with two parents who attend to the guests and serve with great manners and two self-taught sons who prepare the meals in the kitchen.

At the start of the night, you are presented with the a serving platter of the freshly delivered fish of the evening. Depending upon the luck of the catch, this could also include a lovely little lobster from which to choose your seafood. Given this presentation, it would be a serious folly to not have the all-local seafood platter. Ours comprised of a whole baked fish, 4 large pieces of perfectly seared rare tuna, some large grilled prawns and some of the juiciest mussels I've ever had the pleasure of meeting. This was served with a large serve of beautifully roasted potatoes and nice vegetables to balance the meal.

The entree salad of (an unexpected large wheel of fried) blue cheese, salad and apples was a nice introduction to the meal but certainly secondary to the main. I would only suggest it for those who are cheese-fanatics.

If in Mellieha, eat here. Support the family, eat good food, be happy.

Next time I would order the seafood platter again. There is no contest (unless dining on your own in which case it may be excessively large). If available, the lobster spaghetti looked fantastic as an alternative for 1 or to share. 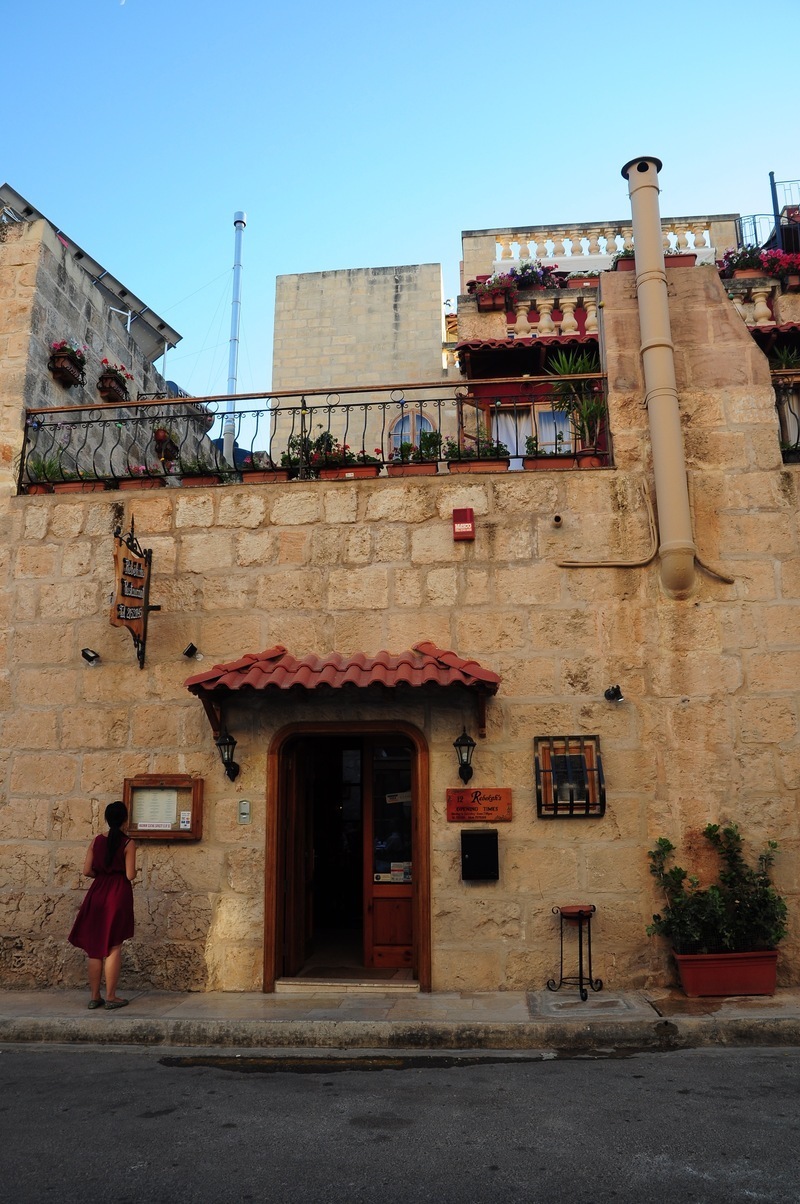 Researching food in Malta was interesting. As a small mediterranean set of islands, it would be expected that Greek and Italian influences would colour these foods - and these two countries are home to two of the most flavoursome cuisines in the world. It seemed strange that many reviews of Maltese food deemed it a poor cousin to these. Nonetheless when surrounded by ocean, it can't be too difficult to find decent food especially seafood right?

Mellieha was home for a few days, especially chosen for its proximity to a lovely stretch of beach, access to the northern tip to boat around Gozo and Cosimo, a single bus ride direct to Valletta, and most importantly a good selection of restaurants in town.

Rebekah's Restaurant is rated #2 in Mellieha on Tripadvisor - usually I don't put so much emphasis on Tripadvisor reviews but there isn't much to read online. Reviews are scant and most are overwhelmingly complementary.

It is a nice adventure to find it. It is the one restaurant well off the main street, walking up public stairs, through neighbourhood streets and to a quiet corner. Unfortunately the eating experience didn't live up to the hype of a first meal in Malta.

Complementary bread and croquet was fine; no faults here. The starter Fritto Misto €11.95 (fried prawn, calamari, white bait, fresh fish, mussels) was terrible - heavily over fried and thus the ingredients lacked intrinsic flavour and any fresh texture. The Baked Brie €9.75 wrapped in Filo Pastry had a powerfully strong blue cheese taste - not for me, but cheese-likers won't mind it at all.

Intermission of Cucumber & Vodka sorbet €2 was a nice refreshing interruption. Certainly not necessary, but cleansing (and charged without ordering it).

The restaurant made a point of showing us the fresh fish of the day Dott €23.95 which sadly was again badly overcooked - I really can't remember much else about the dish. The Pan Fried Wild Boar €24.95 (not a local ingredient unfortunately) had an expected game flavour and was cooked to a nice medium rareness but still remained chewy. The Maltese sausage and black pudding fritters (ie. croquettes) it came with was delicious though.

Most of the all the biggest problem was time. The indoor part of the restaurant was only half full (and there is a rooftop outdoor area that I did not see) but the time taken to serve was ridiculous. That no wait staff ever approached to inform us made it even more unacceptable. From the time on my photos, the night progressed as: 1925 arrival 1935 menu 1947 bread 2004 croquette 2031 entrees 2054 sorbet 2123 main. I think 1 hour for entrees and another 1 hour for mains to be served is below expectation.

This is the first restaurant I've researched into and would not recommend. It had to happen sometime and it is sad to be from a small local place.

Next time I would order from the restaurant nearby on the local street named Bouquet Garni. However if you end up here, the Fish Soup entree and Chateaubriand Carved at your Table looked like the best bets.