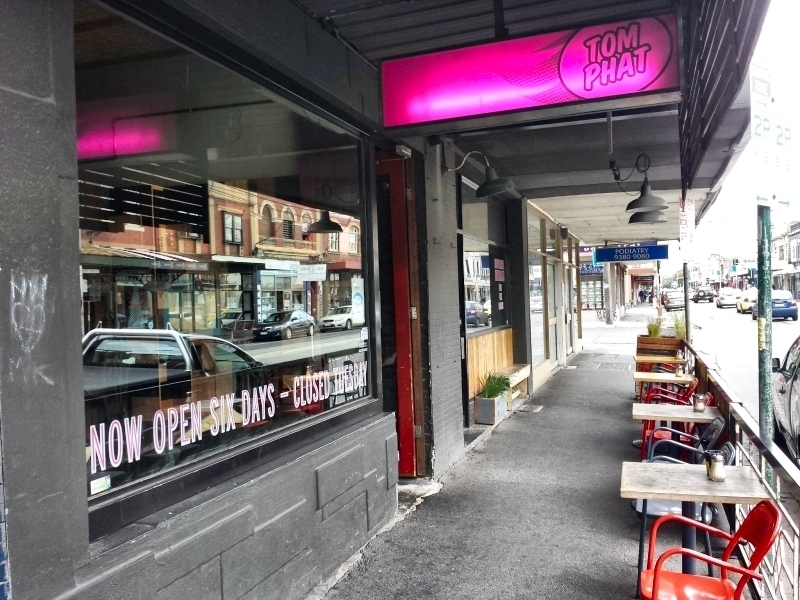 Tom Phat has been on the breakfast to-do list for a very long time. Maybe times and tastes have changed, but the roti omelette was one of the breakfast items of the year back in 2007 (although to be fair I didn't read about it until probably 2009). In any case, waiting 4+ years for something that really isn't that far away, and considering how many breakfasts I've had in between, meant that the occasion finally appeared when two people would meet halfway from respective homes which seemed to be Brunswick.

South-East Asian flavour fusion is still (I think) quite new to breakfast. In Asia I'm used to congee, pho, cheong fun etc, but I can only remember one other Asian-inspired breakfast, being the roti (surprise surprise) at De Clieu.

On a near empty Monday morning, I read the menu to see if anything else would appeal to me more. Uncle Ho's Brekky sounds like Vietnamese broken rice. Black Sticky Rice sounds like a standard dessert in Asia (and now courtesy of Dessert Story). Yunnan-Baked Eggs actually sounds delicious and may be what I come for next time. But for a first visit, your hand is forced by the signature memory of 2007.

- Roti-Omelette (wok-tossed free range eggs & roti, bacon, chives, roasted tomato salsa) - it was a nice combination and certainly different from the usual bacon/eggs/sourdough. I think it gets more merit from being creative and fusion than ground-breaking taste. I still think curry can't be matched when it comes to pairing with roti;
- Sweet Corn Fritters (with poached egg, smoked salmon, avocado-salsa, baby spinach & harissa mayo) - nicely assembled stack with fried shallots and a generous pile of coriander and mild spicy sauce. Tasted as it sounds - good.

They also have a lunch/dinner menu that sounds like a combo of South-East Asia (Viet, Thai, Malay).

I'd still recommend coming to try breakfast - it's at least a change from the other Melbourne cafes all of which have roughly the same menu.