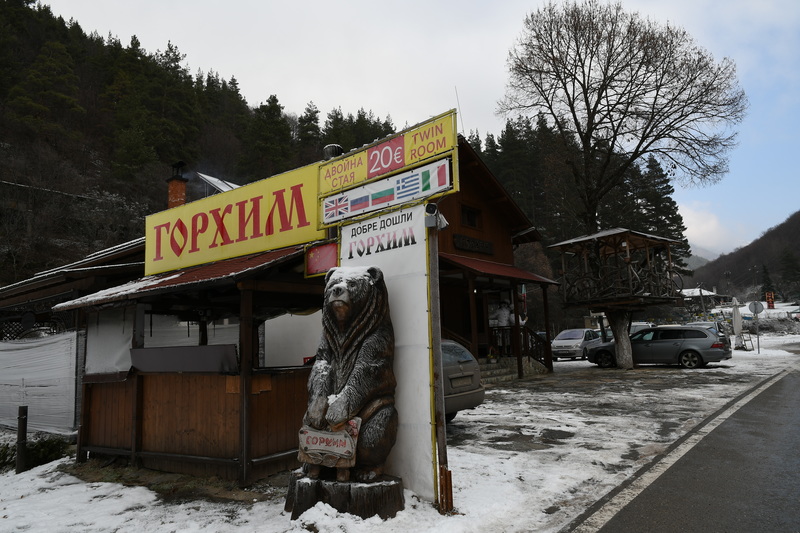 After a long morning of driving to Rila Monastery and marvelling at the beautiful colourful frescoes surrounded by mountains, trees and snow, it was time for lunch. Although there are reviews of restaurants at Rila Monastery itself, the ratings tend to be low. There looks like a donut(-type) shop behind the monastery which had popular queues, but it isn't lunch and we didn't really feel like queuing.

There's 3 well rated restaurants (on Google at least) on the road toward the monastery. They are Magic of Rila, Gorchim and Хан Дяволски води (something like the Devil's Waterfall, as it is near a waterfall). Our driver took us to Magic first which he recommended. It was closed. He took us them to Devil's Waterfall which he also said was good (although many restaurants in the area are similar). That was closed too. So finally he took us to Gorchim ("the bear one") which he and his customers haven't tried before. I wasn't too fussed as any of the 3 seemed alright.

It's "the bear one" because there is a large wooden sculpture of a bear out the front to greet cars. The terrace part is shielded which is great to sit when it's cold outside, although less so because it counts as an outdoor smoking area. Only moderate English was spoken, but certainly good enough to get by.

The main dish of the area is to try local trout, farmed up there in the cold mountainous waters of the river that runs by many of the restaurants.

- Tripe soup 3 lev - very mild flavour of the tripe and ended up being very milky, and tasting like a savoury milk. A bit disappointing;
- Mushroom soup 2.98 lev - very good and lots of butter;
- Grilled trout 10.5 lev - grilled well with soft flesh, although some parts of the skin were a bit too burnt. A simple dish;
- White cheese of the Shope region (white cheese, eggs, tomatoes, pepper) 5.69 lev - from the picture I was expecting a tomato stew with cheese. In fact the dish was quite different as a big mass of white cheese (very salty like feta) with some tomato slices on top. I thought there was some red pepper from the picture but it was a big chilli pepper added on top instead. Quite disappointed at what it ended up being;
- Tsar's pot (mushrooms, bacon, lukanka Bulgarian salami, mashed potato, sour cream, yellow cheese) 7.9 lev - strong ham bits with a lot of cheese, similar to a very hammy pasta carbonara;
- Flat bread with yellow cheese 2.6 lev - very nice with salty cheese.

Overall wasn't too impressed with the food here. If I ever find myself back, I'd try for one of the other two. 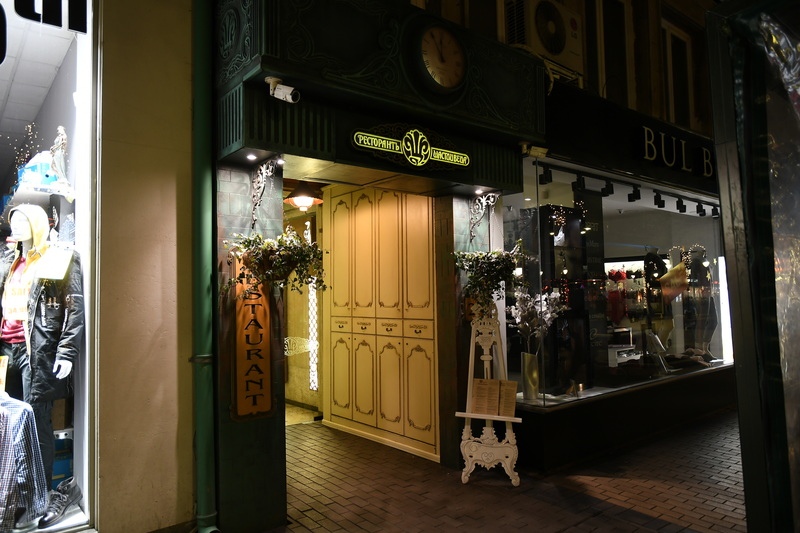 For the one slightly fancier meal in Sofia, the option was between Shtaslivetsa and Hadjidragana, both well rated online and both conveniently located close to our Airbnb near Vitosha boulevard. Our Airbnb host independently recommended Shtaslivetsa and even though the place was fully booked on Saturday night, the nice decoration enticed us to book for the Sunday night.

It was very busy inside, with what seemed to be both tourists and Bulgarians. After entering the passageway from the boulevard, it opens up into a large room with even an upstairs, therefore initially hiding just how big this place is. It is adorned with bright lights, art work, some local TV showing food and travel things. Even though the dining was more upmarket, the prices were far from expensive in relative € terms, although a bit more than other local places.

Our waiter (and overall service) was less friendly. I don't think it was a matter of just being a stern faced local, because we'd certainly had smiles elsewhere.

- Hominy (kachamak) with butter & white cheese 7.9 lev - simple with a baked feta-type on top;
- "Caprese" aubergine (roasted aubergine stuffed with mozzarella, smoked yellow cheese, served with tomato sauce, mascarpone & basil) 15.9 lev - nice and rich savoury tomato sauce and a few spotches of plain mascarpone;
- Homemade grilled sausage 15.9 lev - I think it was a very lean beef mince, quite dense and not moist enough. They probably could have used a fattier cut of meat for this;
- Baked duck kebab with porcini & field mushrooms 18.9 lev - I expected a grilled kebab style, but instead received this stew-like dish with tender meat and a decent mushroom sauce.

Overall the setting and food are good. The price difference is really for the setting though. I'd have to say the dishes weren't remarkably better than the other cheaper local Bulgarian fare restaurants we tried. And the service certainly wasn't included in the price. 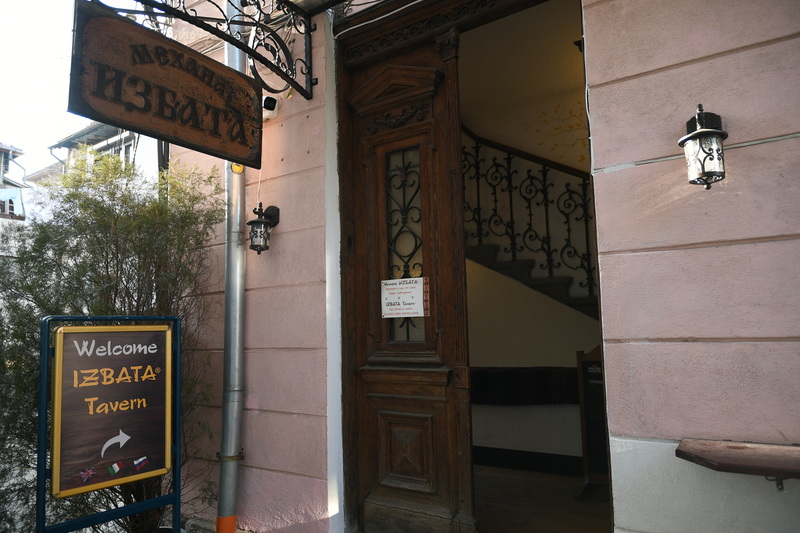 I hadn't heard of Izbata but it was recommended by the Free Walking Tour Sofia group. It is located in the hip part of Sofia just south of Cathedral St. Alexander Nevsky, which is where the tour finished at around 12.30pm. After a quick look around the cathedral, it was the perfect time for lunch.

It's a little cosy place that had quite a few tourists there, some American, some Chinese, some Spanish, but also some Bulgarians too. I suppose not surprising that tourists all read and receive the same recommendations.

Overall an excellent meal with very large servings that more than filled 4 of us after the walking tour. I found out later that there are a lot of chillies grown locally (Chilli Hills Farm Shop is a nice place to visit for chilli products and gin). 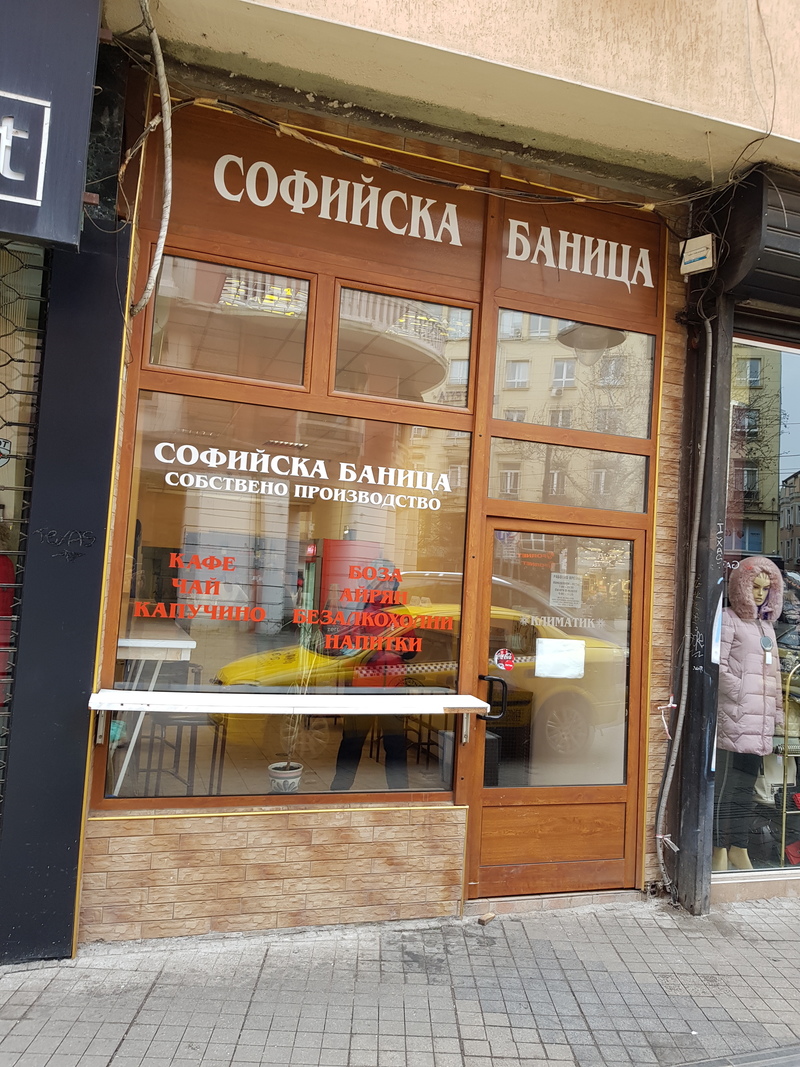 A good banitsa. A whole one just over a kg was 10.3 lev. They only had cheese or spinach/cheese. It's lighter and more aerated than burek with therefore a milder and less buttery flavour in the pastry.

I probably do prefer the unhealthier heavier burek style personally. 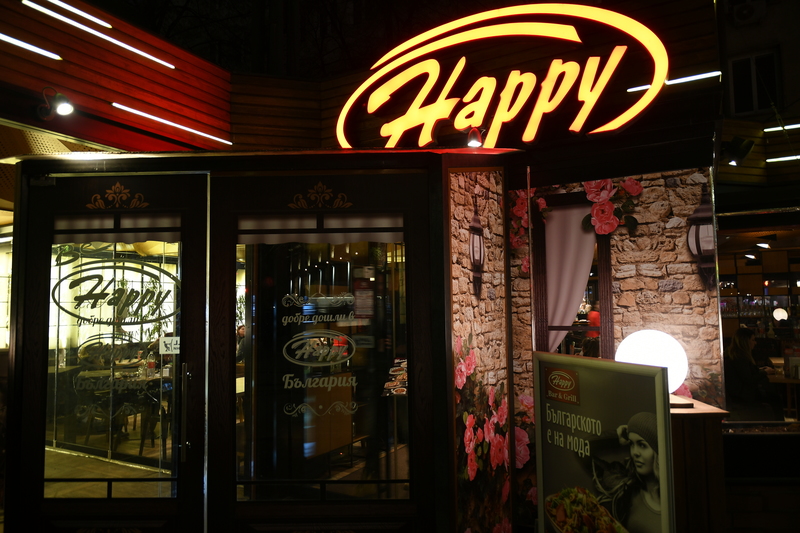 It couldn't be sheer coincidence that the internet, our Airbnb host and tour guide all independently recommended Happy for local Bulgarian food. Indeed the place was full of people on this Friday evening, with the locals smoking away in the front section, and the more touristy people trying to escape it at the back. This branch is located directly opposite St. Kyriaki Cathedral too which gives some nice atmosphere walking to/from.

There's a very relaxed vibe and it feels like TGI Friday. With smoking. All the waitresses grace wearing red and short skirts as the uniform.

Overall a very good and very cheap meal in a local environment. Would happily come back.