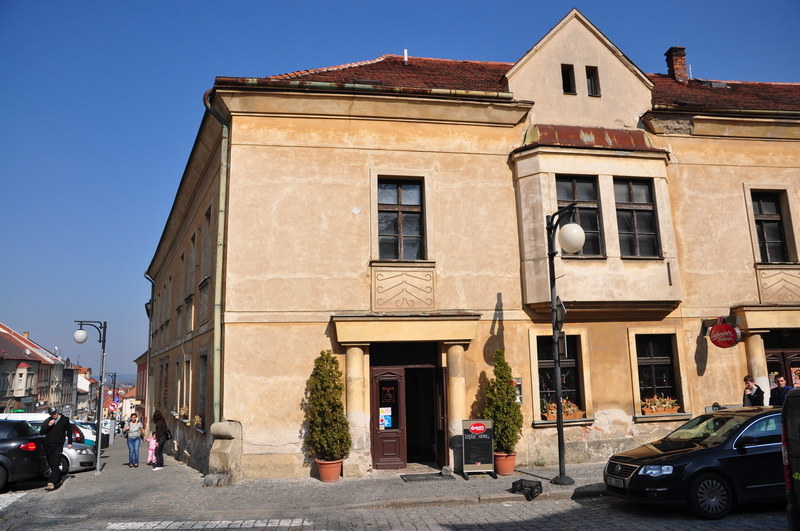 Kutna Hora is a small town and a short trip from Prague. The main (and possibly only) reason people visit here is to see the ossuary (or kostnice). It is a morbid creative decoration of bones and skulls that I believe is more for art than anything religious or war related.

After this visit, there's a small town to look around before finding the appropriate bus back to Prague.

I only had one place on my eat list - Ruthardska which is a medieval bar. After walking past it and seeing some of the medieval decoration I didn't feel like that was where I wanted to go. I continued to walk around and eventually settled on a random little restaurant.

I settled on Chicken breast stuffed with ham, blue cheese & mushrooms, served with cream sauce and a side order of fries. The chicken was nicely cooked and the blue cheese not too powerful. It was a satisfying simple meal and what I expect would be pub style Czech. 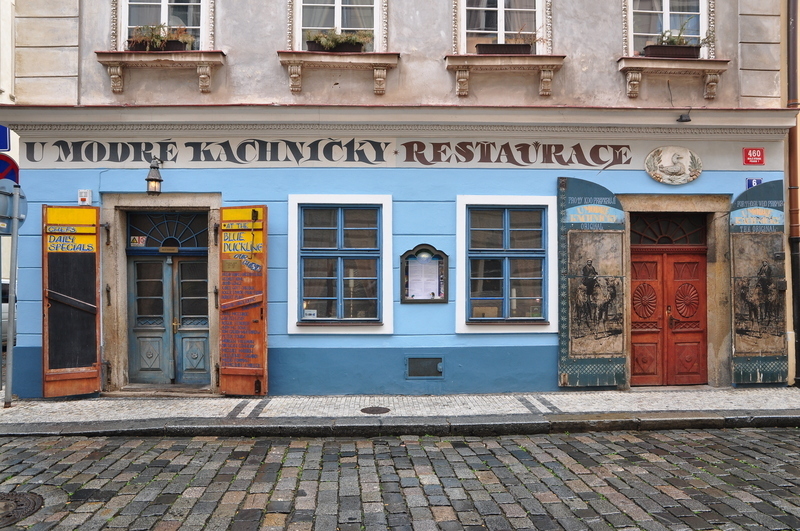 Searching for food destinations in Prague proved a lot more difficult than expected. I wasn't entirely sure why this was as I assumed being a large and popular city, there would be plenty of offerings. However on arriving I realised that food here just isn't that great. A real shame given that Prague is one of most stunning cities I've ever wandered through, but the fact is the Easter market was on and I tried 5 different local street foods and all were honestly quite bad.

With this in mind, I was tentative to see whether my research would amount to anything worthwhile.

U Modre Kachnicky ("The Blue Duckling") popped up a few times in the dearth of decent internet information, but I chose it mainly from the Travel & Leisure website. After arriving for a lunch, the board outside boasting previous guests including Sean Connery, Roger Federer, Martina Hingis, John McEnroe etc. could have been seen as a bonus (as they would likely want to eat well) or a curse (as maybe they just get herded places by their PAs). At least the restaurant lacked tourist throngs and buses.

In any case the best way to test modern Czech food seemed to be to stuff myself with the degustation menu - so I did.

- Smoked Duck Breast with Onion Marmalade and Wild Game Pate with Bacon and Cranberries - pate was simple and tasty, not particularly smooth but more meaty and went well with cranberries and complementary bread. Smoked duck breast was a more delicate version of proscuitto - very nice.
- Confited Duck Roulade with Walnut Stuffing, Red & White Cabbage, Potato Dumplings - nicely tender duck rolled with a liver and dumpling stuffing melded nicely with the cabbage which was cooked in an apple sauce. The potato dumplings were as always thick, doughy and much disliked.
- Fallow Deer Saddle with Rose Hip Sauce and Almond Potato Croquettes - beautiful piece of meat, following the trend of sweet sauces. Dumpling at least had crunchy almond exterior, but inside was thick, doughy and much disliked.
- Filet Mignon with Vegetable Cream Sauce, Carlsbad Dumplings & Cranberries - sadly the filet was overcooked (they didn't ask me how I wanted it), sweet and savoury sauce and cranberries were a nice flavour.
- Apple Strudel with Punch Sauce & Walnuts and Cinnamon Pancakes with Blueberries & Sour Cream - soft pastry strudel with a brandied sauce was tasty, as were the blueberries. Unfortunately the pancakes were very thick and doughy...

Overall quite a nice meal for 980Czk (approximately €40) and very, very filling with each serving being equivalent to a la carte. Considering each individual dish was 250-500Czk, the value was quite amazing also. It certainly wasn't outstanding, but I think you won't do much better in Prague (for Czech food at least).

Next time I would order the degustation menu again. It's probably better to go for dinner (but you must book) or for lunch after a long tiring starvation hike. Alternatively if this doesn't tickle your fancy for food or price, Cafe Slavia was the only other place that came up frequently in my research.