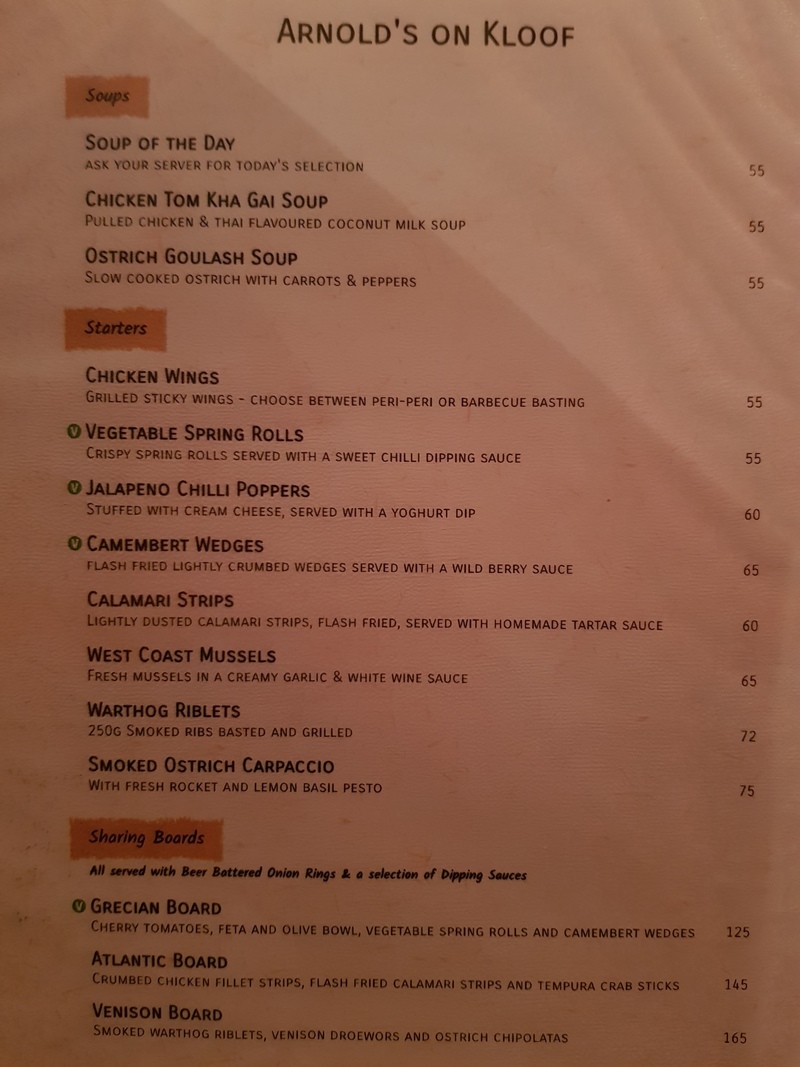 South Africa is known for braai and meat particularly. One of the things I longed for but never had the opportunity to during the safari trip to Kenya and Tanzania in 2013 was trying game meats. They just weren't offered at the places we went.

Arnold's was extremely close to our accommodation off Kloof Street and so the easy choice for the first night dinner.

- Ostrich goulash soup (slow cooked ostrich, carrots, peppers) R55 - too heavy on the salt, but meaty and flavoursome. It wasn't the most tender meat, but otherwise couldn't be distinguished from beef;
- West Coast mussels (creamy garlic & white wine sauce) R65 - a waste of time. Tiny mussels that looked old and had no flavour and a soft mushy texture. The sauce also needed a good dose of salt and pepper;
- South African Game Platter R249 - grilled warthog ribs (smoked, flame grilled, lightly basted) were a lean meaty version of pork ribs cooked with a sweetened barbecue sauce similar to a ham glaze; crocodile tagine (mild Moroccan style sweet & sour curry-based) were tender pieces of meat, moreso than I've had from crocodile previously with earthy spices; kudu loin (grilled, rolled in cumin & salt) is a type of antelope with the medium-rare meat grainy but a mild game/beef-type flavour; ostrich steak was a very tender piece of meat with a very mild flavour to it, similar to beef eye fillet with the grilled and green peppercorn flavour coming through.

The best part of the meal was easily the unexpectedly tender ostrich steak. Although not the strongest in flavour, it tasted nice and was a dining revelation.