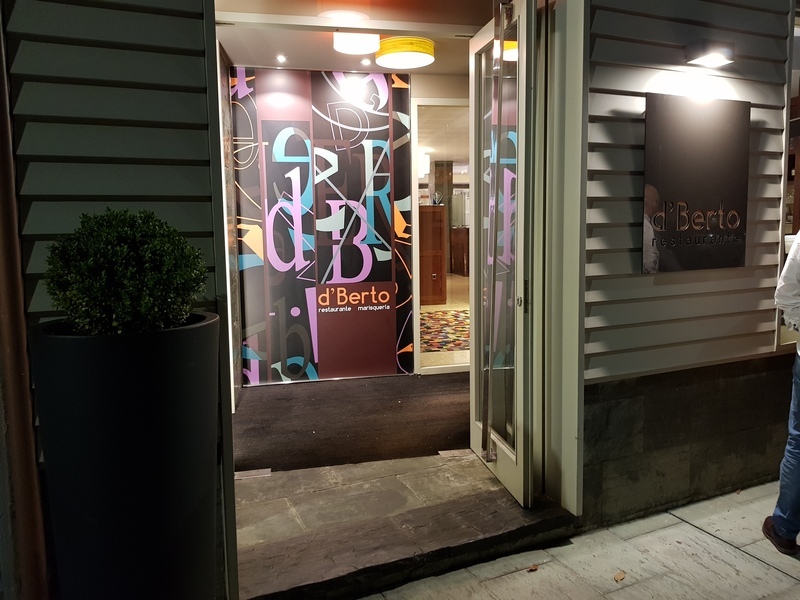 Apparently D'Berto was rated the Top Seafood Restaurant in Spain 2014. That's a huge accolade considering the seafood quality in Spain generally, particularly in Madrid and Galicia. I had been somewhat underwhelmed by the seafood fiesta in O Grove, and although part of me wanted to buy seafood to cook at home, part of me also wanted to go to a restaurant to see what they could do (in what would be probably the last night in O Grove for my lifetime).

Then there was the choice between restaurants, the more standard ones with standard prices, or D'Berto with its reputation and premium prices. I managed to get a Saturday night booking by calling on Friday. Considering it was the seafood fiesta opening weekend, there's a few interpretations - it really isn't that busy a town anyway, or people are happy eating locally rather than paying premium. Maybe a bit of both.

After finding a street carparking spot (not realising until a few minutes later they have their own private carpark), we walked past the front and were immediately confronted by very large crustaceans. The lobsters and langoustines in the tank were enormous, almost certainly the biggest I've ever seen. Once walking inside, some huge clams and percebes were in the display also.

The wait staff spoke English and were very friendly. Essentially they have no limits - order as little as you want of each dish and they will do it for you. Flexibility is always appreciated.

- Galcian broth €6;
- Oysters €4 each and Warty venus clams (carneiro) €2.5 each - both were good with nice flavour. The clams weren't as big (they seemed to not give us the giant ones) or as strong as those I have in London. It was one of the few places where I've preferred the oysters over the clams. I thought the clams were the spiky shelled ones (but I was clearly wrong);
- Percebes grande from Cedeira €19.8 for 100g - quite large, but not the biggest they had there. The largest one served was about thumb sized. It was definitely more satisfying than the thin types I got from the seafood fiesta. They were also cooked in very salty water, maybe just a little too much;
- Crab (necora) €27 - this tiny crab was coated in salt and had crystals on the shell. It made it difficult to eat and stung our lips. I mentioned it to them and they didn't really say anything. I probably should have been more insistent;
- Clams to the Frying Pan €15 for half portion - standard. Didn't need both these and the raw clams;
- Scallops "The Original" €6 for 2 - these were actually very nice grilled (with butter I think) scallops that retained their thickness through the grilling. Very good;
- Fried lobster (bogavante) €44 for 500g - the smallest lobster they had, which was fried in butter. Very nice too. Oddly served with freshly fried chips, that weren't cooked properly such that several were stuck together and therefore soft;
- Cheesecake (tarta de queso) €7 - unusual in that it had a very strong milk flavour to it.

For €159.3 for 2 people, there was good variety but it just didn't seem worth the money. I suppose it feels like they are priding themselves on the size rather than the cooking quality. In fact most things are raw, boiled in very salty water, and the few extras are fried (which is a bit better). For comparison, I'd have to say Ramiro in Lisbon is better (https://eatlikeushi.posthaven.com/cervejaria-ramiro-lisbon-10-2013).

I was disappointed to find they also had charged €1.5pp for the bread and €2 for tap water. That is not a standard in the region and probably should have limited my tip. Oh well. I won't be back.