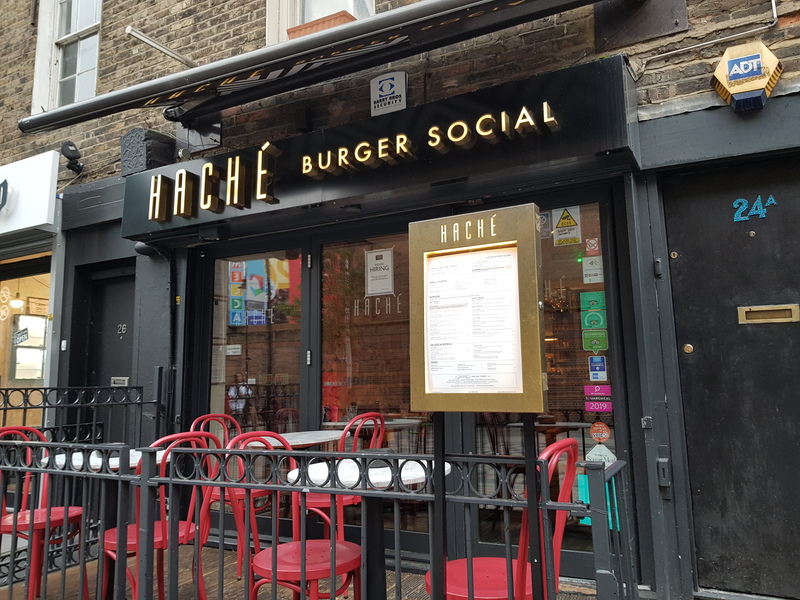 It has arrived - a vegan burger that tastes like meat. I would even go so far as to potentially choose this burger over a beef one (not only for ethical reasons but even taste). However the cost then becomes a factor...

I had seen the name Beyond Burger but didn't know what it meant up until now. Elements combined together to form a vegan patty to resemble the atomic structure of meat. A 50% lunch offer at Hache to promote it was all I needed to try it. After a wander around Camden and a massage, the holistic day brought us to Hache. It is otherwise a relatively expensive French gourmet burger place.

Beyond Le Fume (Beyond Meat vegan patty, grilled aubergine, smoky semidried tomatoes, Violife Cheddar, zucchini straws, Rubies in the Rubble mustard mayo, toasted ciabatta bun, presented in a smoke-filled dome) £13 full price is majestic and has it all. Theatre, taste, dripping "meat" juice and accompanying grilled smoky vegetables to help. It is wonderful and flavoursome more than I thought. It has taken over the #1 vegan meat patty burger title from the tomato-based one at Temple of Seitan/Camden (https://eatlikeushi.posthaven.com/temple-of-seitan-london-09-2018).

Truffle fries were alright, but the truffle oil was very strong and made it all seem a bit too fake. I'll stick with the burger. At £13 and more expensive than any meat one, it takes some consideration though.