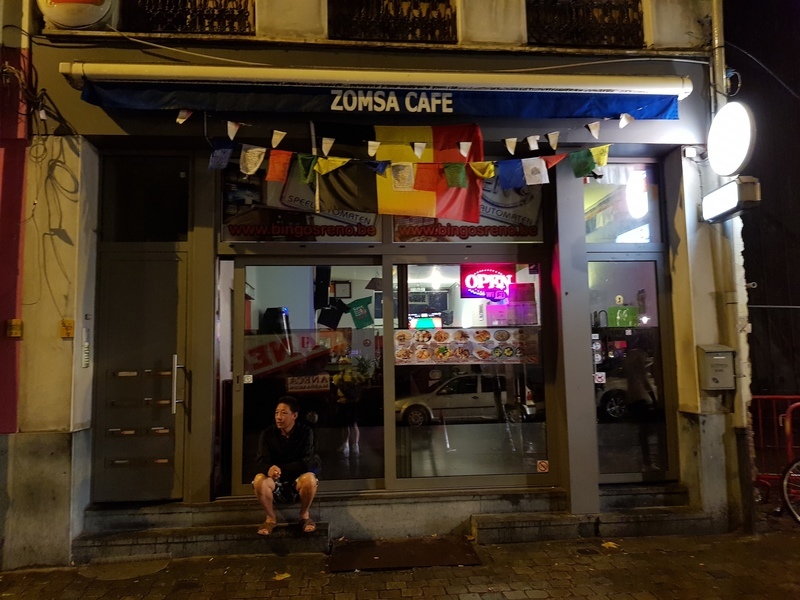 Eating at Antwerp after 10pm even on a Saturday is not recommended. So many things are closed. In fact I also learnt a few days later that between 3-6pm is also generally a closed time.

On this rainy evening after arriving, the area surrounding the Antwerp Central station seems to be largely Asian with a huge number of Chinese and Thai places. The ones that weren't closed are called cafes or restaurants, but really they look like bars and probably don't serve much food.

After strolling through what I assume is Chinatown, we came across Zomsa who had a menu and were serving. We discovered the cuisine is Tibetan, and certainly everyone in there was probably of that ethnicity to the point they looked bemused/amused that anyone else happened to be in there. Football was playing in the background and what was probably the family running the place eating their own dinner too.

The menu helpfully had pictures and ordered the Special zomsa thali €6.5 and mokthuk €5.5. You can probably tell from the menu photos and the dish photos that they really look NOTHING alike. The thali didn't have any bread (the waitress said they didn't have any) and instead a huge amount of rice. Also the various little trays of curries (like a thali should) was replaced by one generic meat dish, some vegetables and some pickles with a mildly hot chilli. The lentil soup was good though. The mokthuk was supposed to be momos with soup. The picture had the soup red and spiced but this one was decent broth but without any spice. There was a spicy hot sauce (not sure what chilli but it was really decently hot) although I'm sure it wasn't what made the menu soup colour red.

Overall the food was fine. It did seem a little deceiving from the pictures. But the staff were nice at least. And they were open...