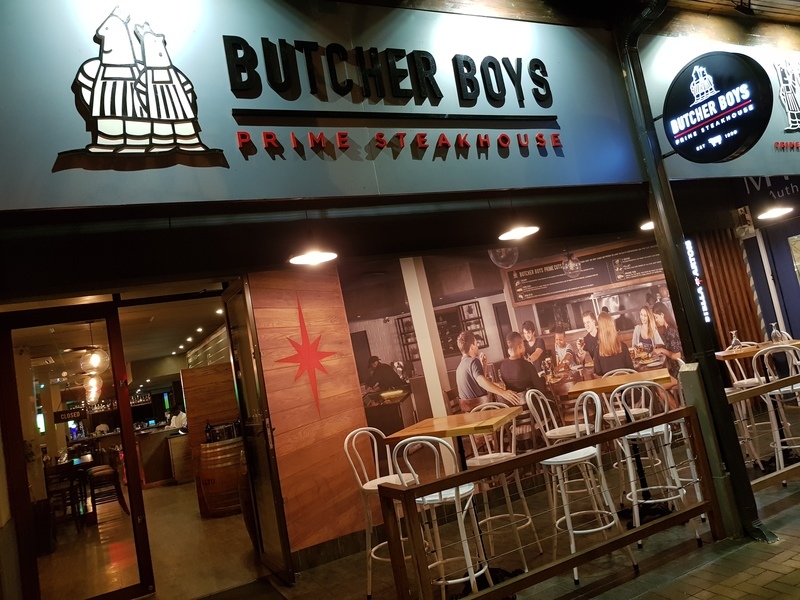 The final dinner of the trip was a choice between TA #1 The Grill Room at our lovely The Oyster Box Hotel or Butcher Boys. Looking at the menus, both had promising options. Butcher Boys won out for two reasons in the end - the prices are cheaper and they had ostrich steak. As much as I like a good beef, it's pretty easy to access that in many places of the world (albeit agreeably not necessarily at those cheap prices). But ostrich steak is much harder to find and after the great one at Arnold's (https://eatlikeushi.posthaven.com/arnolds-restaurant-cape-town-10-2019) I was keen to have it again.

It was only a short safe 3 minute walk from the hotel and it did make me think it would have been nice to explore Umhlanga a little more during our time there. But next time instead then.

- Butcher Boys beef spare ribs 400g R165 + R5 to upgrade fries to the Butchers Boys type - thinner bones than I expected for beef and glazed with a sweet glaze. It was very nice. Honestly I thought they may have given us (big) pork ribs by accident, but they said it was beef. The BB fries upgrade meant adding garlic and parsley. The distribution wasn't very good and just sprinkled on the middle fries. The fries themselves were also nice in taste but average in texture and completely lacking crispness which was disappointing;
- Ostrich fillet steak R200 - I requested it rare and they cooked 2 of the medallions perfectly rare with a warm core. Interestingly the 3rd medallion was medium rare and that was much more tender to cut than the rare ones, which were tougher and chewier. Arnold's ostrich was medium rare too, so that must be the way to go for this meat. The flavour was a again similar to beef (as the standard comparison) just with a slightly different edge to the flavour. I did enjoy it. The mielie pap was a dense sort-of mash with bits of corn. They were served with a tomato relish (great for the pap) and a blueberry sauce (good for the ostrich);
- Garden salad R65 - simple, undressed accompaniment.

Overall a good meal. I have to order medium rare for my ostrich next time. 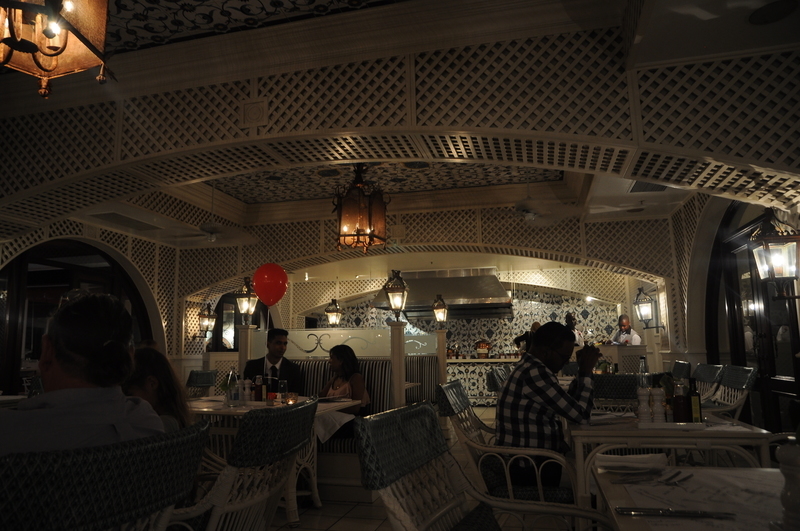 Staying at The Oyster Box Hotel (rated the best hotel in Africa) came with a few priveleges. Not only the ocean view from the private bedroom balcony, the complementary champagne and chocolate strawberries, nor the congratulatory balloon and rose petals during the evening turn. Our deal included some (good) sushi and a glass of wine, and that's where we first found The Ocean Terrace. It is essentially the main eating area for the hotel, and even though there is an oyster bar and a high tea section, you can enjoy those meals on the terrace also.

I had read about the famous curry buffet in Umhlanga and fortune would have it that it is hosted at The Ocean Terrace itself also. Given the evening (and potential threat of mosquitoes), we opted to sit inside for the night.

After flying early that morning, having a small sushi lunch but also lots of wine/champagne, strawberries, I had to maintain some stomach for the buffet and that meant eating nice and late at 8.30pm. The deal is simple - R450 for all the curry your heart, stomach and bowels can handle and ended with a dessert.

There’s many staff wrapping samosas, ready to reheat your naan and roti and replacing the curries all evening. It is an exercise in 5* hotel in action.

Tandoori chicken was disappointing and dry. Beef shish was ok spiced but similarly dry. They had both probably been sitting too long. Spinach and cheese samosa was ok, but nothing special. I wasn’t quite sure what the chilli bite was, but it wasn’t that chilli and not that good. In fact the only good thing from my entrees plate for the chicken pilau – much heavier, wetter and darker than a biryani but with some good spiced flavour.

Next was onto the curries, which had to be better since it’s a curry buffet. I didn’t try the veg korma nor dhal because I can’t imagine that would be different to elsewhere and I needed to save stomach place.

From clockwise around the plate, we had garlic naan (ok texture, garlic was there but not very strong), roti (actually very good), potato pea mushroom (standard), fish curry (very nice version strong in flavour and cooked down until not too firm), lentils (standard), chicken and prawn (a mild creamy style with nice tasting but one prawn was good texturally and the other was mushy), butter chicken (a nice simple version rich with tomato), beef vindaloo (brilliant and cooked deep until the chilli and spices had some serious burn), butter bean (standard), lamb (very lamby but really not much spice. Quite disappointing).

I went back for another serve of the fish, butter chicken and vindaloo. The vindaloo was remarkably good and if I had the stomach space, could handle even more fire and burn, then I would have had a third one.

Dessert included kulfi with crushed nuts (ok, a bit sweet), a vermicelli pudding (even more sweet), and gulab jamon (didn’t try it, they said it is even sweeter and cooked with rose water and syrup).

Overall it’s quite expensive for curry but you are paying for the variety and setting.