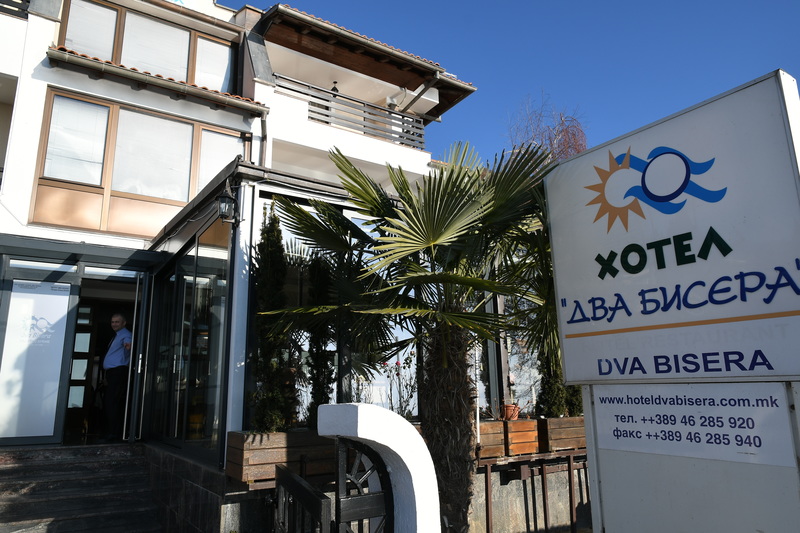 After the morning seeing the Bay of Bones museum and then the peacocks at St. Naum Monastery, it was time for lunch and enjoying the winter sun. I had Ribar on my list, but our driver called and said they were closed. There was also Rritja e Koranit found from Google maps, but it was on the other side of St. Naum to our return to Ohrid.

Our driver took us here. The hotel part and the higher end decor inside did make me wonder. He did choose the place as it had a terrace across the lake, which meant braving the smoking section. But as the sun gleamed through, it was worth the compromise.

Ohrid bread came out first which was a crispy pretzel with sesame seeds. Really nice and went well with the trout soup.

- Trout soup (trout, carrot, lemon, flour, spices, pepper, oil, salt, parsley) 160 den - thick and delicious with chunks of fish flesh and flavoured with the vegetables and butter. Really really good;
- Ohrid trout style (trout, peppers, tomato, onion, oil, salt, paprika, lemon, potatoes, broccoli, parsley) 1580 den/kg - trout came served whole but already despined. It was expertly grilled until the flesh was firm but not overcooked and not burnt at all. It had good flavour cooked with onion and yellow peppers inside until those additives were sweet. I can't remember how much we ordered, but I think about 500g (of the dish, not the fish alone);
- Fried belvica (belvica, salt, oil, potatoes, lemon, broccoli, tomato, flour) 1900 den/kg - fish seasoned and fried to a crisp skin. Flesh was very soft although not much flavour in itself. Again, not entirely sure how much we ordered but I think about 500g was the 4 fish and sides;
- Salad for 4.

It was a nice lunch even if the terrace sunshine meant smokers were near us. The food was good though and fish very well cooked.

Our driver did say that food was much cheaper on the Albania side of Lake Ohrid and often they are hired for a full day tour of the lake and so have lunch after crossing over. Trout fishing on the Macedonia side is regulated and hence the availability is less and the price higher. In Albania, it is lawless (so he said).