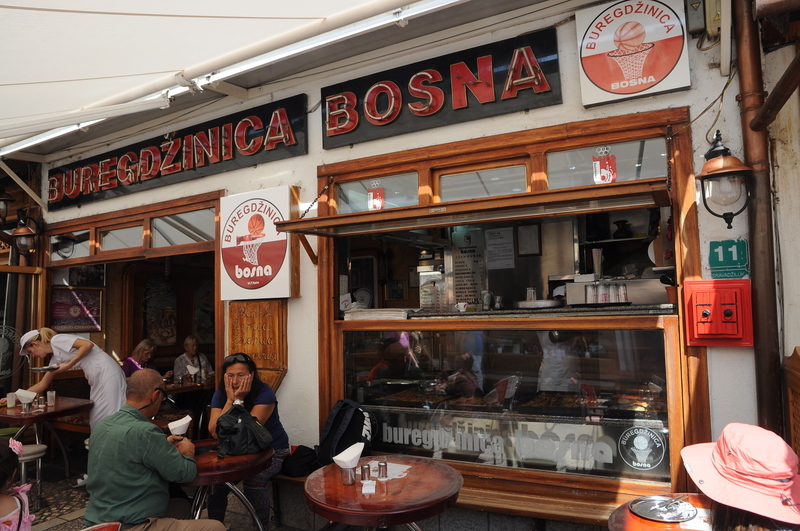 Much like there are cevapi-ries, there are also burek-aries. Bosna was recommended by the free walking tour Meet Bosnia as the best in town. On the mid-morning before taking the bus to Tjentiste and Sutjeska, my inquisitiveness brought me to walk there enroute to a taxi.

The outdoor seating in the sun is warm and pleasant as the burek comes out. On the first morning in Sarajevo (actually enroute to the free walking tour) we had a slice of pizza and burek from a random pizza shop (it may have been Merak?). The burek was outstanding - filled with strong meaty flavour, salty pastry that was wonderfully crisp. Easily the best I'd had to that point.

Bosna was equally delicious in all the same aspects. At 12-14 BAM/kg, it isn't expensive at all. They also have a range including meat, spinach and cheese, and also some that looked in different shapes and sizes.

It would have been nice to be able to sit longer to enjoy it all. Next time. 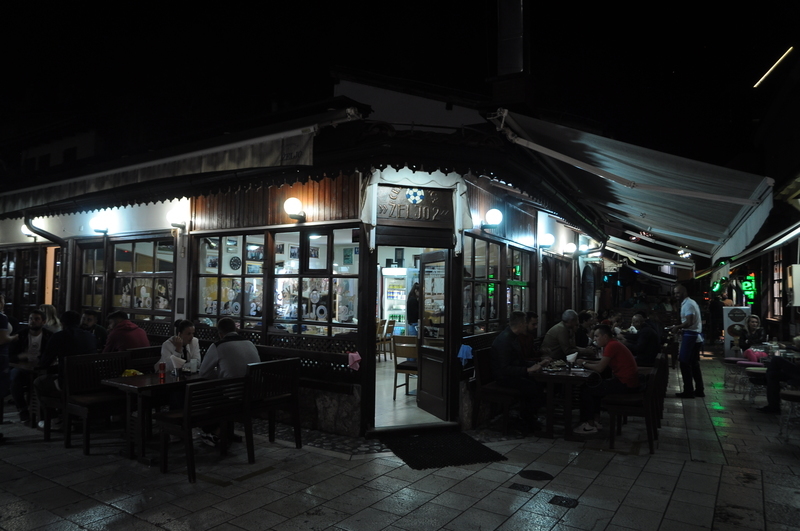 After the first cevapi experience in Nune (http://eatlikeushi.posthaven.com/cevabdzinica-nune-sarajevo-09-2018), I couldn't resist my own urges to try the famous Zeljo before leaving Sarajevo. And so on the last evening that's where we went.

There's 1 and 2 - they are across from each other and I'm sure there is no difference in food or prices. I went for number 2 as it looked a bit quieter and had more spare outdoor seating.

The prices are marginally higher than Nune, at 10 for 7 BAM (vs. 6 BAM). Oddly Zeljo serves only cevapi, with no sides available. Kajmak cream cheese was added on request for 1.5 BAM and was thick and slightly sour. The bread was drier and crisper. Meat was soft and tender. They were very stingy on the onions.

Overall I thought Nune had cheaper prices, more onions and available sides for balance. Zeljo has a more atmospheric location (and is bigger also), but otherwise I'd pick Nune. 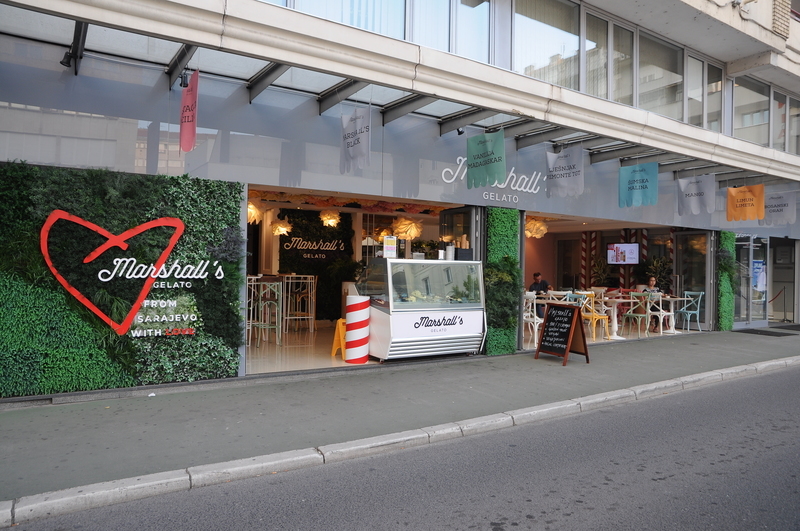 There wasn't much in the way of gelato in Sarajevo. But luckily I found one down the road of some central backstreets near the flat.

This place is essentially a large dessert cafe with plenty of seating space. I couldn't figure out the pricing system easily - it seemed to be 1.9 or 2.4 BAM per scoop depending upon the flavour.

The Sicilian pistachio was very thick with bits of nut. As per advertised it was slightly salty, whereas I tend to prefer a slightly sweeter one. On the other hand, the pear was quite odd and tangy. Not the finest, but good enough for the afternoon. 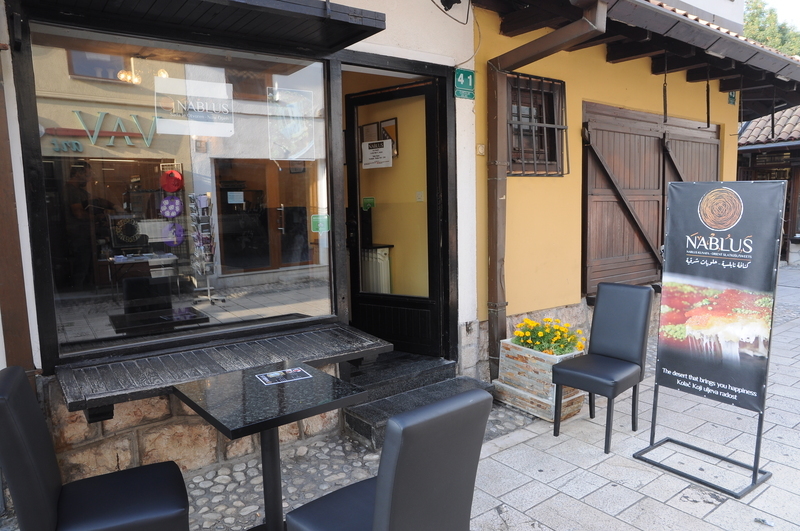 Nablus is the place in Palestine where kunafa (aka kunefe as I've had it previously in Turkey) originated, and the owner/cook in this place is from there, hence the name. I was reassured by one of his friends and customers that was the real deal.

We seemed to have entered at a busy period in the late afternoon, where a host of orders were ahead of us (mostly coming from a few who ordered many to takeaway) and as a result had to wait 20mins. Not so bad in the context of things and gave me an opportunity to see his technique from pale shreds of white cheese to a finished product, dark and crisp and inviting.

It is definitely different to the Turkish ones I've had. Particularly the stringy cheese tastes very much like mild cheese, and had a smoother texture than the wisps of kataifi I'm used to. Additionally the sugar syrup wasn't nearly as sweet.

It was nice, it was good, I liked it. I can't say for certain which version I like better, but perhaps the Turkish very slightly. 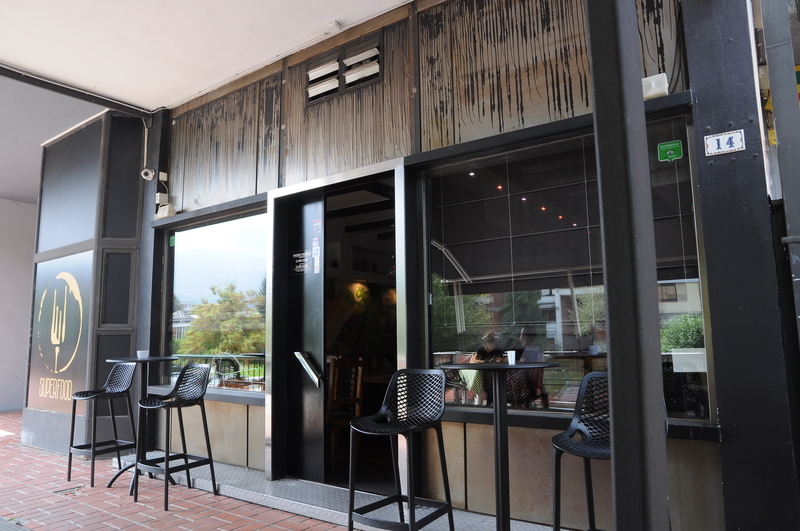 Superfood isn't very convenient to central Sarajevo. But we had to get to Penny Plus to get some screw-in camping fuel and it was hopefully somewhere much closer than OBI (although since discovered there is a store right in central that now sells it too).

We could have taken a taxi but thought a nice walk in good weather (although hot) would be a pleasant way to see Sarajevo, a park and a local suburb enroute. Superfood is remarkably highly rated (TA #4, Google 4.7, Facebook 4.8) for a place out of the way.

I really wanted some meat. The Gulash with 300g high quality grass-fed beef was my preference. But they said they had no meat. What? That doesn't make sense. Chili con carne? Nope, no meat. Just burgers. Hmm. It didn't makes sense - maybe the beef patties are pre-prepared and they don't have meat chunks for goulash and can't elaborate the patty to chili. Who knows.

Anyway so I ordered the Snake Bite burger (200g beef patty, pico de gallo salsa, dijon mayonnaise, jalapeño peppers, homestyle potato fries) 10 BAM. It was a nice burger, cooked through (sadly) but the patty was still tender and quite thick in the middle. Mustard mayo was smeared on a large soft bun, and the salsa with chopped tomato was fresh.

We also tried the Shakshuka (poached eggs in a spicy tomato sauce with onions, chili & cumin) 7 BAM. This was almost a semi-assembled version, since I'm used to it arriving in a little pan with bread on the side. It had minimal cumin in it and oddly no sauce either.

It was a decent breakfast. I can't say I'd seek it out specifically. Strangely others seemed to be eating a meat looking dish similar to goulash... maybe the meat arrived soon after... 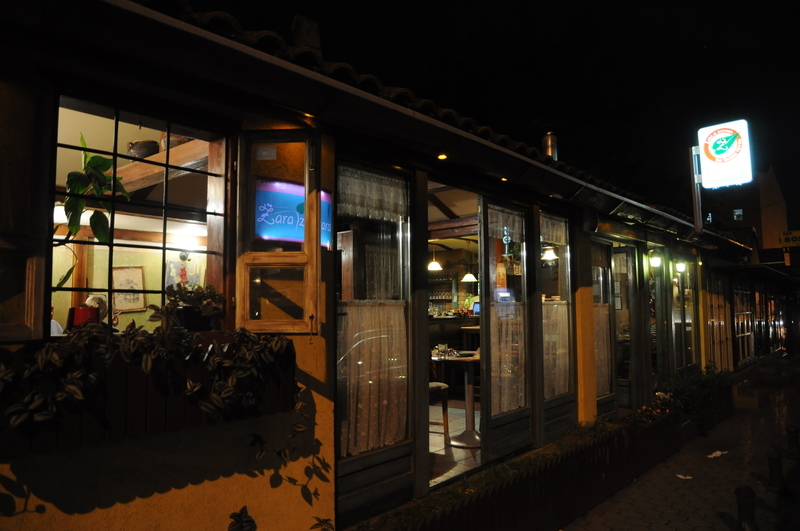 I read about this restaurant on the Culture Trip website (https://theculturetrip.com/europe/bosnia-herzegovina/articles/sarajevo-s-top-10-cultural-restaurants-bosnian-bites-beyond/) and it seemed like an interesting way to try local dishes with a twist. It was also conveniently located near the market and a supermarket and also near our accommodation.

Sadly it wasn't all happiness and smiles. It took a while to get the waitress (I think she may have been the owner or manager also?) to attend to us on several occasions, to order, to ask for something, to get the bill, to pay the bill.

- Traditional doughnuts with nettle & cottage cheese 7 BAM - fried bread was crisp and very good, the sour cream thick not too sour. I did enjoy this dish;
- House Special I (assorted sarma, dolma and meatballs) 12 BAM - onions, peppers and vine leaves all stuffed with soft beef and all tasted the same. Simple very salty;
- Veal medallions served on French toast topped with mushroom sauce 18 BAM - veal overcooked but still ok for tenderness. Good grilled zucchini and aubergine with char bits. Soggy toast as expected under it all.

Unfortunately the bread (or dough mix) was essentially the same for the bread, doughnuts and French toast. It would have been nice to know this to not get the same heavy carbohydrate over and over.

Overall I thought the meal was average. Next time I would try Karuzo, Dveri or Aščinica Hadžibajrić F. Namika (the other 3 places marked on my map that I didn't get to). 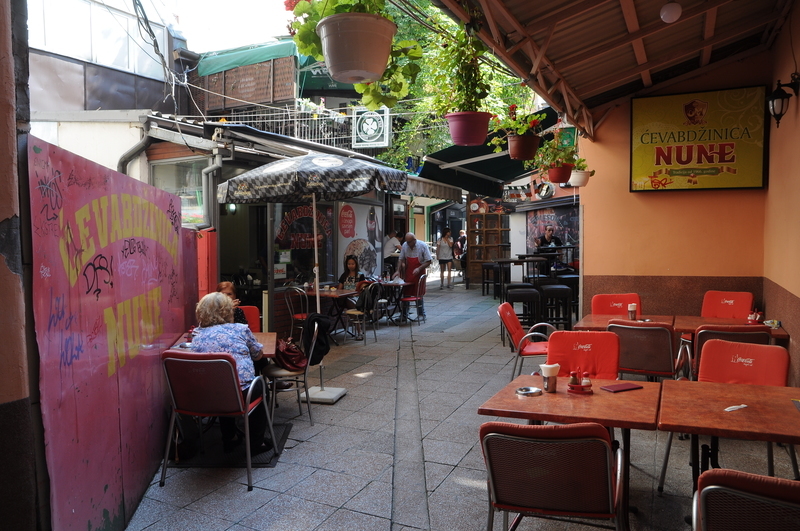 B&H has many of place for cevapi. I call them cevapi-ries (which is obviously incorrect, but makes sense to me...). Zeljo (1 & 2) seem to be the most well known, although if you read online, everyone has their favourite. The free walking tour we took with Meet Bosnia recommended Nune on their information maps, and so I thought trying their local recommendation was worthwhile.

It's a much quieter area and so even in what I consider to be lunchtime, there were seats available both inside and outside. The ladies work hard in the kitchen chopping onions continuously and cooking/fanning the meat and bread until it is ready.

Finally the cevapi is served at the minimal price of 10 for 6 BAM with 0.5 BAM for a serve of peppers. The bread is moist and used to pick up the meat. Each cevapi is soft meat simply flavoured with salt and served with raw onions. There's a thick yoghurt curd and another sauce I was unclear about. The hot peppers added chilli, a little tanginess and contrast. Overall very tasty.

I couldn't tell the difference in the meat between Nune and Zeljo, but for other reasons I would therefore come back to Nune given the choice. 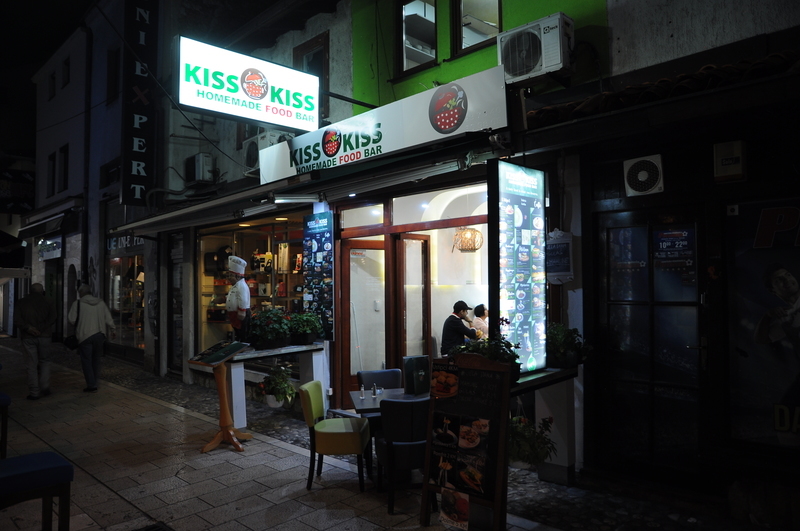 After the late and delayed arrival of the bus from Split to Sarajevo and then the 5 flights of stairs walk up, energy wasn't at an all time high. But hunger persevered for me to get takeaway. Unfortunately I hadn't done a lot of reading about Sarajevo food particularly late at night (ie. about 22.30 on a weekday. Knowing what I do now, I would definitely go and get cevapi next time.

On this occasion a burger bar drew me in. The "cook" smoking while he prepared the food was an introduction to the culture.

It was alright. It had flavour albeit without much quality. I think I was just missing all the pre-drinks.