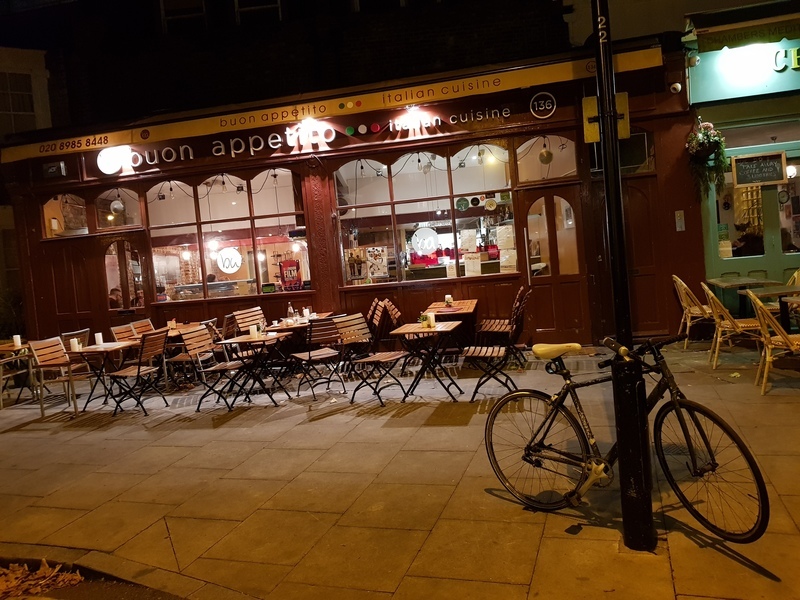 I wouldn't ordinarily have gone out to try Buon Appetito but my ex-Italian flatmate insisted it was some of the most authentic Italian she had eaten in London and would only order her UberEats Italian food from there. Since it was a short walk through the meadows of Victoria Park it was worth one visit.

It's definitely on the more expensive side but there were Italians and non enjoying the food. It is very good in all aspects. I can't say it's the best/my favourite, but I'd be happy eating it again. 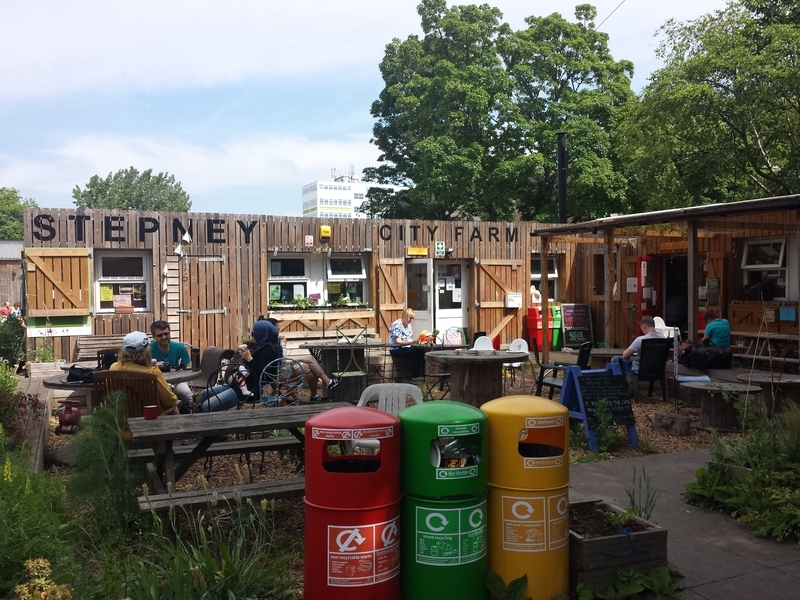 There's a farm with cheap homemade food which on this day was chilli beans on rice (limited menu variety but at least tastes alright), a very small carpark market selling grilled sausages and some produce, and the opportunity to play with and feed some farm animals.

So much fun to be had! 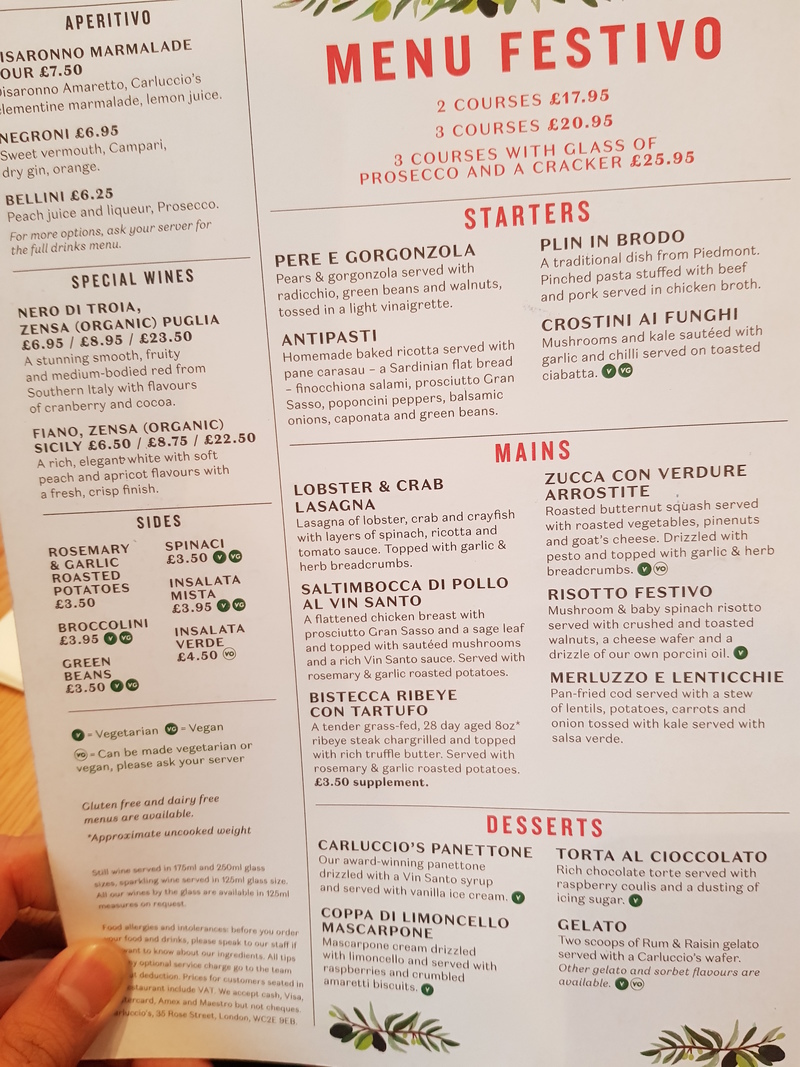 Antonio Carluccio has been a face of Italian cooking for me not because I've watched his TV shows or eaten at his restaurants, but moreso because I've looked through a few of his cookbooks when finding a smaller version of Marcella Hazan to use. After his death it had been on my list of places to try so luck had it that a friend suggested it for a Christmas meal after visiting NHM Wildlife Photographer of the Year exhibition.

There was a special menu for the festive season. With 2 courses for £17.95 or 3 for £20.95. 3 courses for lunch seemed excessive although I wanted to squeeze in the panettone but just couldn't do it...

All dishes were very tasty and of good quality. To top things off, the staff gave us a buy 1 main, get 1 free card to use to jolly in 2018. I guess I'll be back soon! 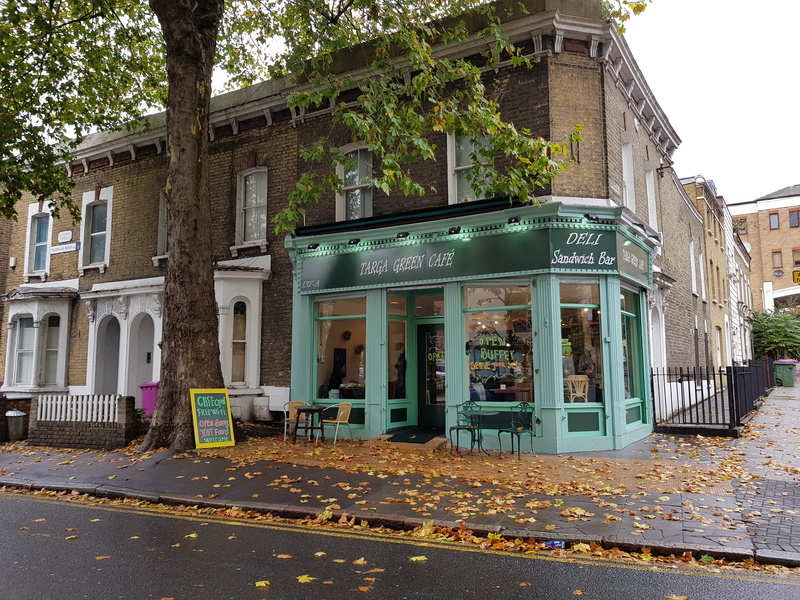 Targa Green is a lovely little cafe off the main region of Roman Road. I think the owners are Moroccan, cook great Middle Eastern and speak French to each other. They are very friendly and encouraging on the weekend buffets. £13 is a moderate price for a brunch for just food but the variety and quality makes it worthwhile. And the matcha latte is good too!

Perfect for a lazy weekend brunch when you have a lot of time to think about life. 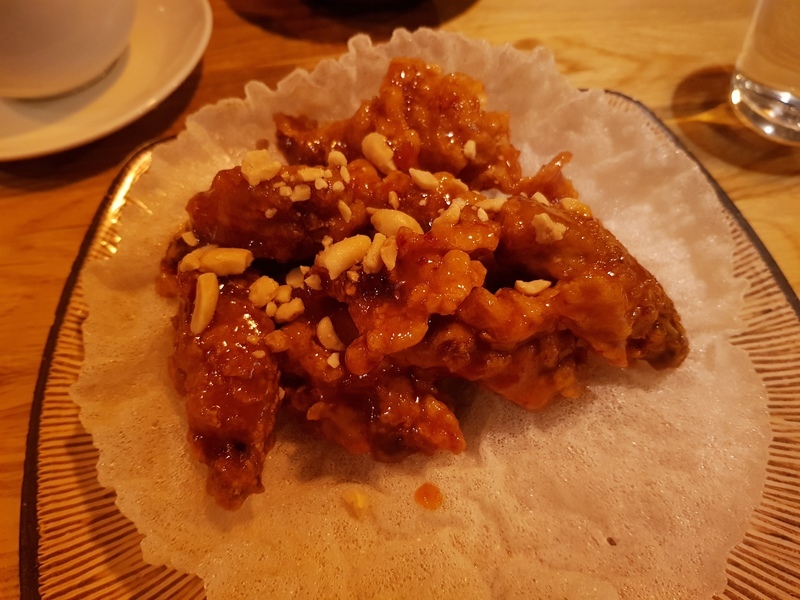 This was an exciting night because I had tickets to the opening preview of Hamilton (how lucky I was to get those). After eating at A. Wong a few weeks earlier, something cheaper and more casual was in order. There's a few places in the area and this Korean one looked interesting and had good reviews. Additionally it would only be the second Korean place I've tried in London, the first in 2013 somewhere around Tottenham Court Road.

They've got all the classics - mandu, japchae, bibimbap, tteokbokki and chicken. What more could one want?

- Chicken katsu (deepfried crispy chicken with sweet & sour sauce) £7.5 - nicely fried and juicy chicken pieces in a mild sweet sauce. I generally prefer my KFC more on the chilli side so it's a shame they didn't offer that;
- Seafood bibimbap £9.9 and Beef bibimbap £9.9 - both were served in the hot stonepots but for some reason they couldn't have been more different. The seafood had a lot less flavour and none of the rice crisped up on the bottom. The beef had reasonable flavour but had a good amount of rice crusted there. And with both dishes we didn't touch the bottom rice for a while to enable it to do so. It was quite strange. The gochuchang sauce is very mild in chilli and so I added quite a lot of really coat the dish red.

I know it's already in theatre district but I'm sure Hamilton will improve their business for years to come. And so it should because this place is pretty good. The bibimbap will have me coming back when I'm due to see Wicked next (or Hamilton again). 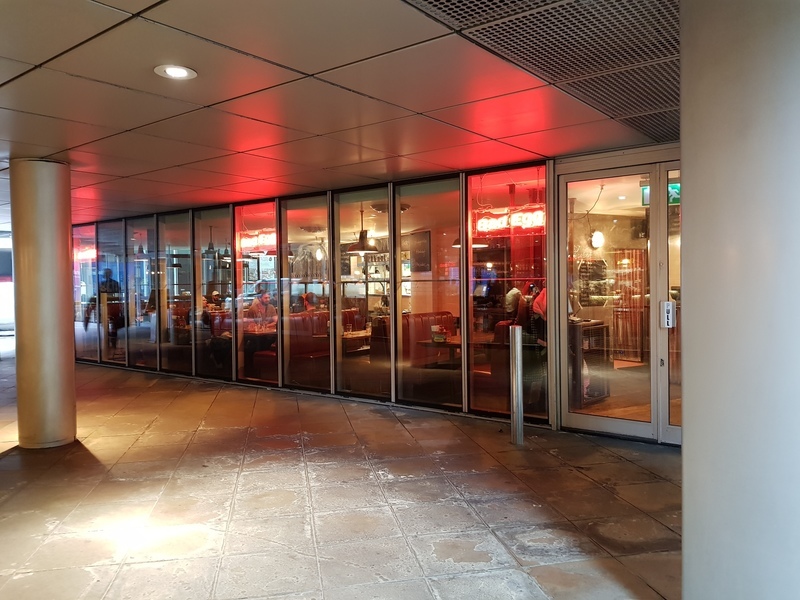 Bad Egg is Neil Rankin's move away from smoke to eggs. But it's a lot more than that. The menu seems to be heavily dedicated to Korean spice, various hashes and lots of cheese.

Harissa Lamb Hash (crispy potato, pulled lamb, harissa, leeks, cheese & a fried egg) £10.5 was a heavy flavoursome way to start the day and tasted a bit like barbecue lamb had come to breakfast. The cheese sauce was thick and lifted it into coronary territory.

I don't find myself often in that area (too many suits) but I'd happily go back there with a bigger appetite (and belly). 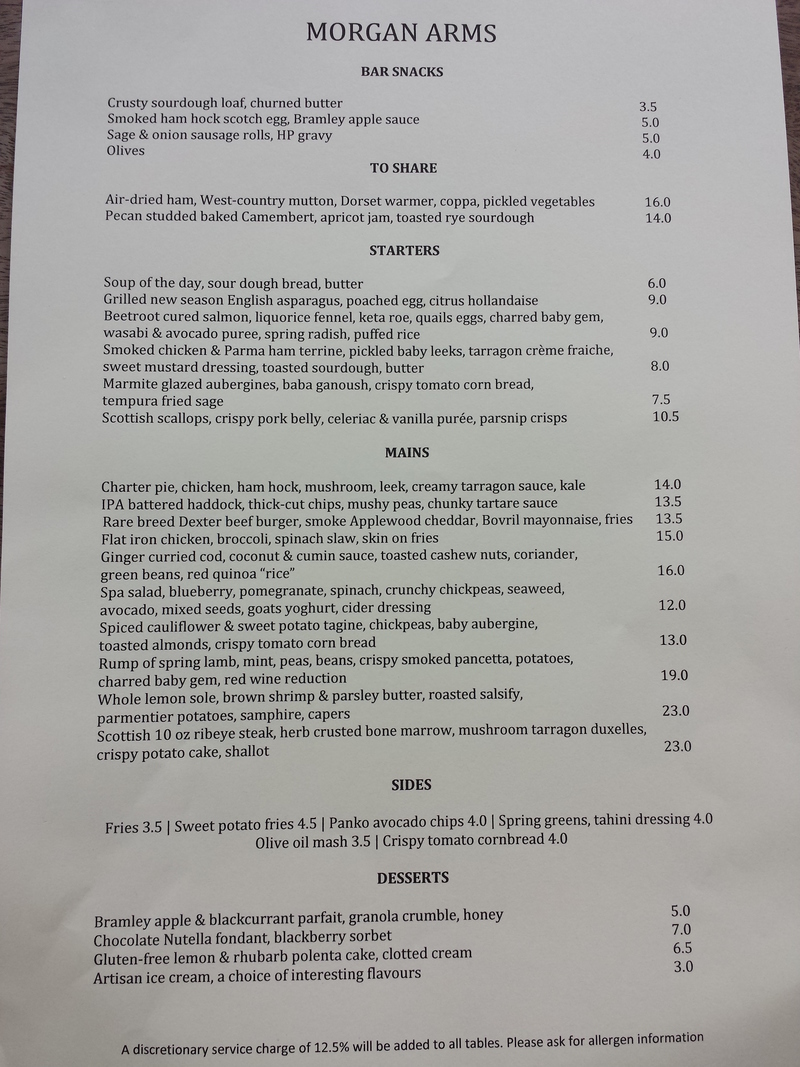 I've actually been to The Morgan Arms ever since the first day I arrived in Mile End/Bow when the poor state of the flat meant we had to leave for several hours so it could be cleaned. On that ridiculous 35C (or so) day, sitting inside was stiflingly humid but at least it was respite from the sun.

I haven't had the chance to go on quiz night Wednesday or live music Thursday, but I have been able to play a mostly intact game of Monopoly Manchester edition and see Cards Against Humanity strewn about.

The food is generally good without being great. It is definitely a step above the other pubs in the area that I've tried. For that reason they also charge more than the other pubs too. The service varies but generally food takes between 30-60mins to arrive.

It's not the best around (I'd have to test The Marksman in Hackney not too far away to compare) but it's adequate for the area. 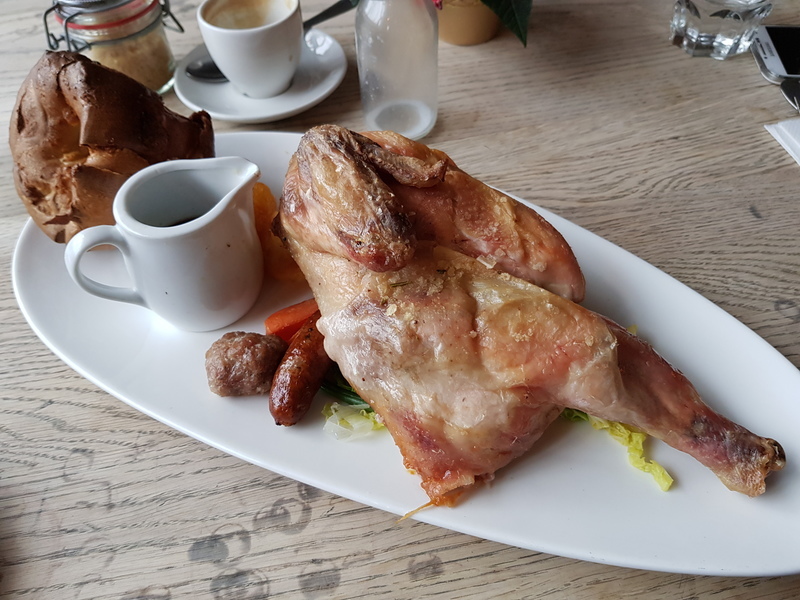 I've been back for Sunday roast which was my first (and only) for 2017. I wanted to go somewhere more well known but laziness meant proximity was the blessing.

Roast half chicken £16 was quite tender and flavoursome whereas the roast beef £17 was quite small, cooked medium-rare but chewy and not that good. Additionally the Yorkshire puddings were burnt and tasted as such. I wouldn't go back for that. 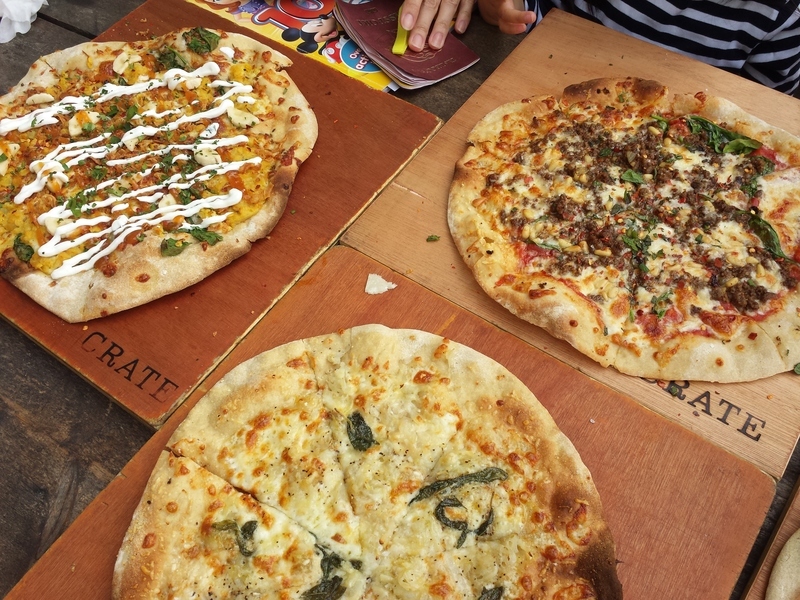 Up near the bridges and next to a big carpark, many a yuppie, their dog and their young family attend this drinking hole for a weekend lunch. It serves pizza and although the bases are crisp Middle Eastern flatbread rather than your standard doughy base, the creative toppings make up for it.

I'm not sure if I'll specifically go back to the area as there isn't much else for me there. The bases didn't thrill me even though the toppings did moreso. 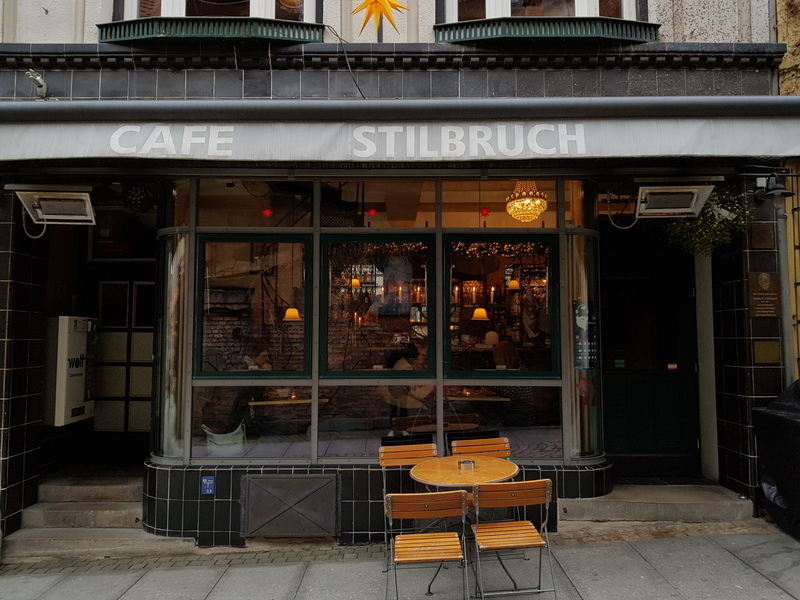 After a night out of Christmas market, gluwein and sausages, Saturday brunch was the perfect way to prepare for the drive to Nuremberg.

I'm not sure what the competition around is, but I expect this would be up near the top. Not only did I have it listed as a place to visit, a friend living locally recommended it as her favourite brunch spot in the little town.

It was a good breakfast and very popular with the locals on a Saturday morning. 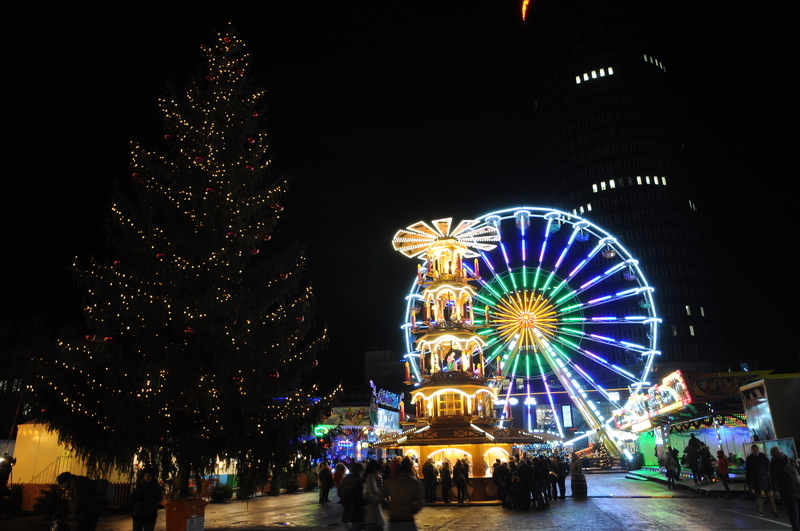 It's a small town not known for much other than Carl Zeiss. The Christmas market had two areas which were smallish but contained everything needed. In fact I'd argue it had almost everything Nuremberg did (other than the singing) and in a smaller area with much less people.

The Jenaer bratwurst is a tasty long thing in a bread roll. It was actually more satisfying than the Nuremberg equivalent of which they are famous.

Additionally the quarkballchen is something I didn't find in Nuremberg at all. These little sweet fried donuts of goodness are definitely worth the effort.