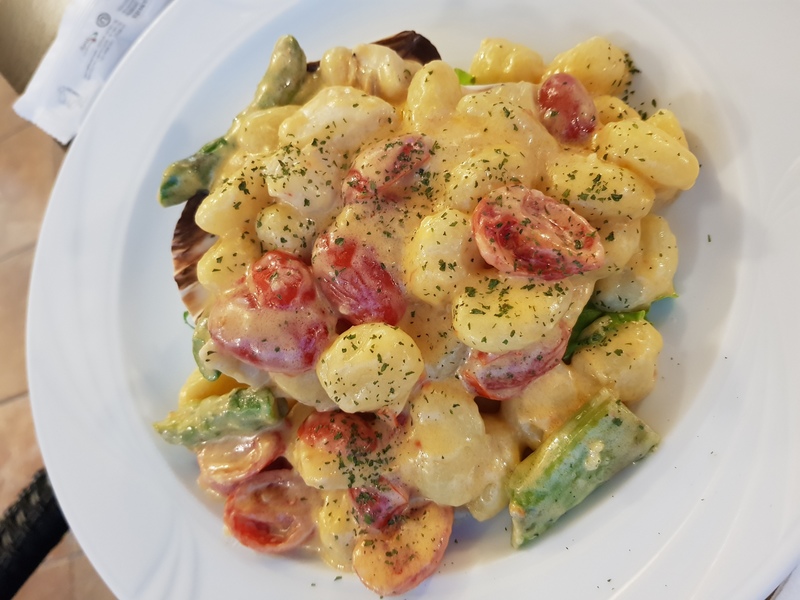 After the long drive from Cortina to Venice airport, it had been perfectly timed to fit in a stop at Belluno, filling up petrol, and eating dinner before returning the car and flying out.

The options nearby were limited, but Ristorante La Sosta had good Google reviews (4.2) and was conveniently close with some free parking conveniently found around the corner. I saw Bar La Sosta and it took me a while to ask and check that the restaurant was the same (Google Maps makes you think they are separate places next to each other).

On a hot, most humid and intermittently raining evening, we sat outside and braved some mosquitoes and ordered the huge serves of pasta the internet had promised us. And it was huge.

- €11 gnocchi with (some) scallops hidden in amongst it;
- €13 seafood pasta which was large and nice, with lots of small ingredients. The prawns were not peeled which made it a bit more fiddly. Pasta was slightly al dente too.

I think 2 people could easily share 1. But if it doubt, just order one each... 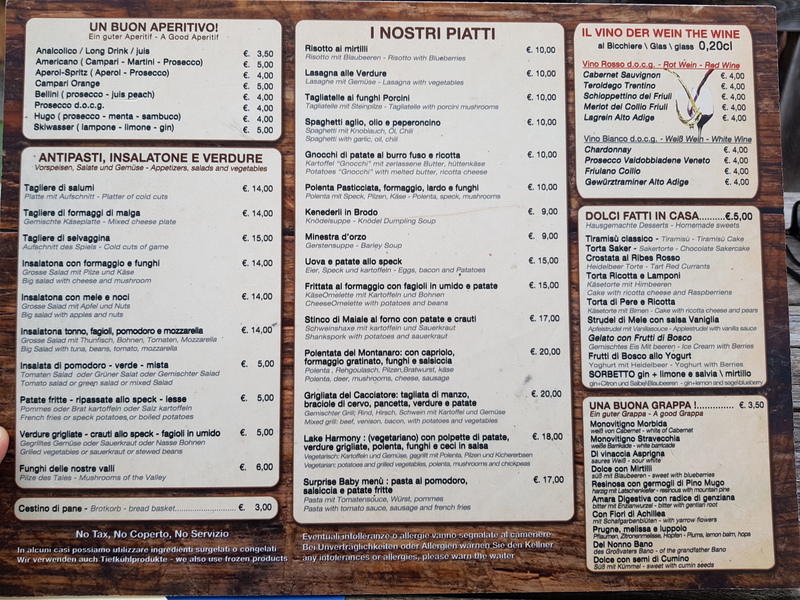 After the pleasant walk around Tre Cime, we were hungry and there was a bit of time to kill before driving back to Venice airport. Definitely not enough time to try something else like Lago di Braies, but enough to get a meal. For whatever reason I stopped at one of the first restaurants once leaving Tre Cime. It was a combination of hunger, a nice setting opposite a small lake, and also the restaurant sign outside stating "polenta funghi" as though it was a sign of Italian food to come.

Like in Cortina it ended up being a German restaurant. I suppose being so close to the Austrian border, I should be less surprised.

There was no cover charge for the bread basket, another welcome practice that is not Italian.

It was nice sitting outside waiting to see if the rain would come, and it didn't luckily. There was constant smoke from the people around us however which was less than perfect. 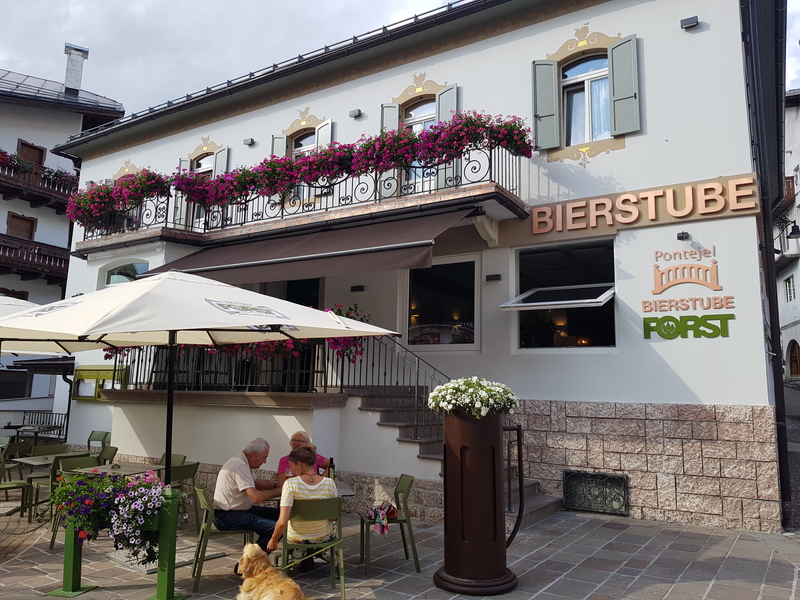 After the extraordinarily long walk to Lago di Sorapis (the usual way is 2h and easy, the roundabout way the 2 older Italians and their dog suggested to us was 4h and hard), we were famished. A lot of the restaurants in and around Cortina were closed or not serving any food (other than maybe more pizza) at 4pm.

Eventually this place seemed to have some decent stuff, even if it was a German beerhall.

- Lasagne alla bolognese €11 - excellent, meaty and a thick bechamel layer;
- Tyrolean speck with cheese, pickled gherkin, horseradish - nice speck with 2 cheeses that were plain, and 2 that had more flavour. 1 seemed like a mild cheddar, but couldn't say what the others were (and wasn't told).
- Mixed salad €6

There was no cover charge and this place had the best bread collection of all the restaurants we ate at, including a nice caraway one. 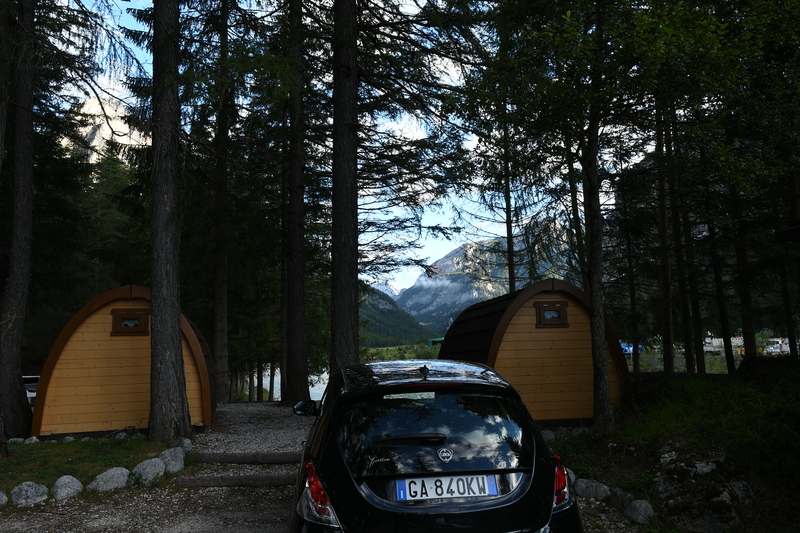 The view from mini-pod 1 was phenomenal especially for the sunrise and sunset times. At €70/night, the 9m2 was expensive real estate but still cheaper than every other option available in Cortina. I would gladly stay here again for all those reasons.

It does mean the options for food are limited to driving (and parking) in Cortina or eating at the ICO pizzeria. It is just like Italy to have an affordable and good quality pizzeria as a standard in a semi-remote camping site.

The did forget to cook my pizza the first night I was there waiting for takeaway (and took about 1h), whereas the second night they were conscientious and did it in 10min. 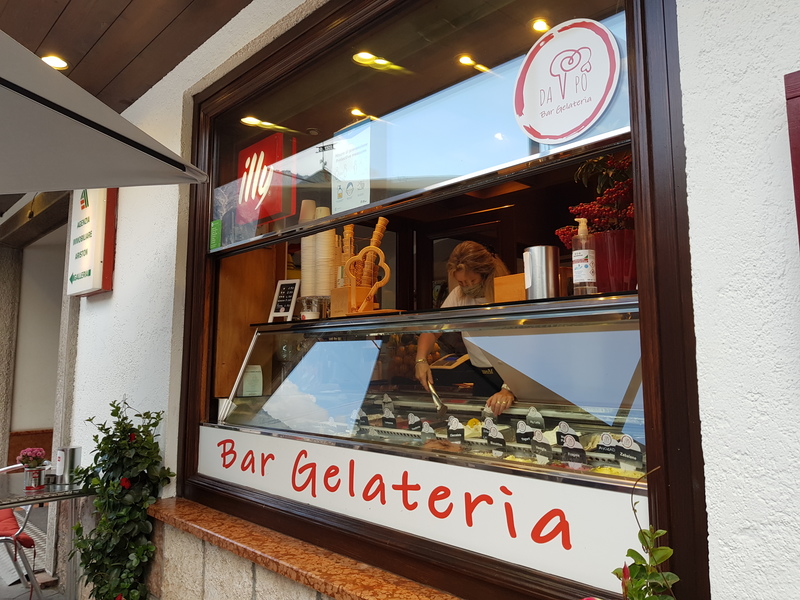 The one and only gelato place in Cortina is a pretty good one. I think enough said about that. 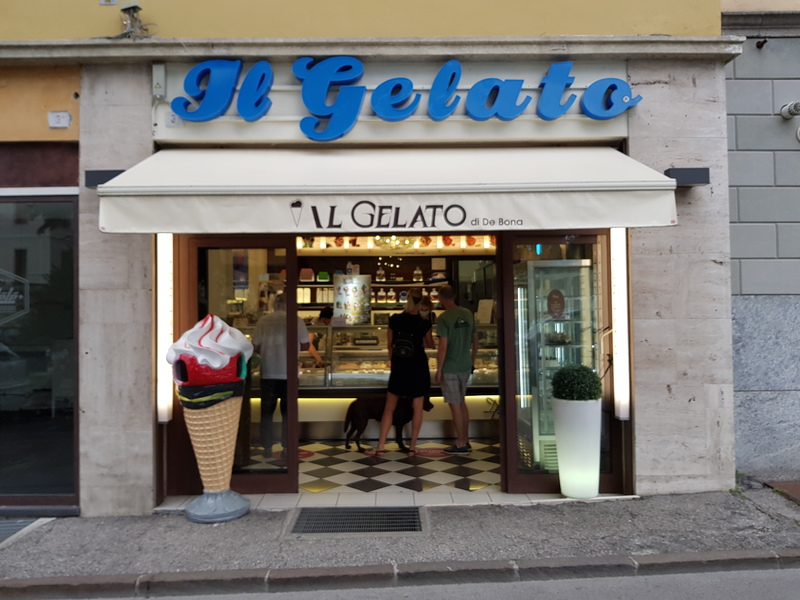 A final gelato before driving to the airport. There really wasn't any point to stopping at Belluno other than for a break from Cortina and to repack our bags. But the gelato happened to be across the road to where we parked, and so lucky for me! 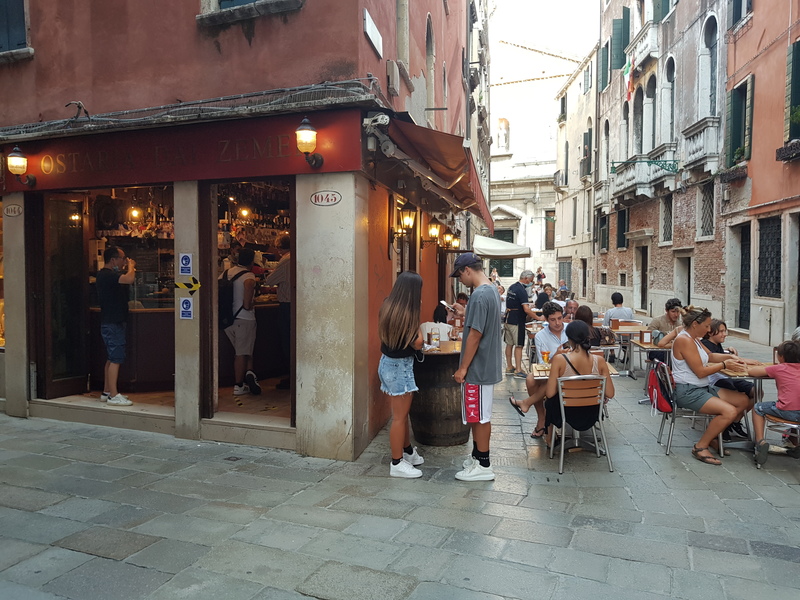 Poor choice to go on a Monday since some of the big players like Bar All'Arco were closed. I did try all 3 spritzes of Aperol, Campari and Cynar, with what I remember of the tasting profiles to be sweeter, bitter and herby. 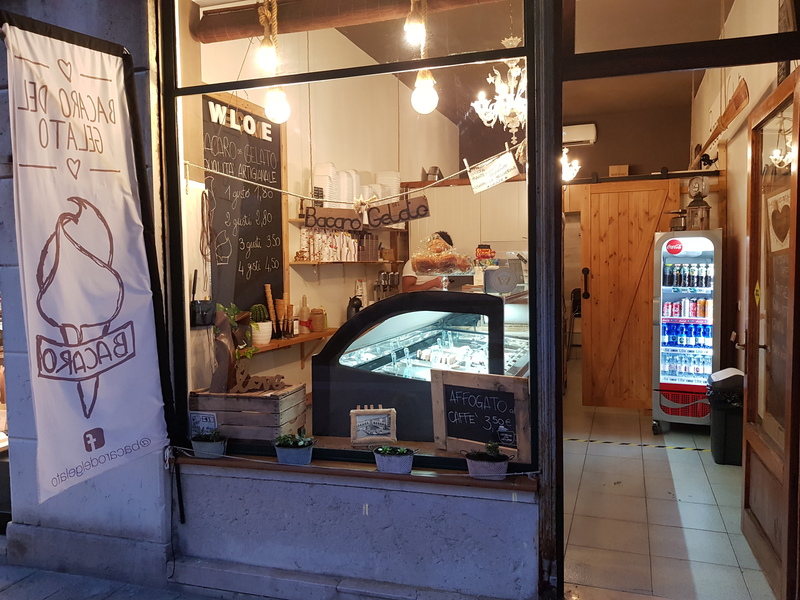 I skipped past Gelato di Natura (reading and seeing for myself that it was akin to Suso) and instead went for the highly rated option in the local north. It was late in the evening and they had run out of pistachio, but added a tiny little speck on top of my choices just to let me try.

Cremino al pistachio (dark chocolate with pistachio cream) and mango were both good and fine. I didn't think either of them were mindblowing and I would choose Suso for flavour and location, although at €1.8 for 1 scoop and €2.8 for 2 scoops you can't beat Bacaro for price or value. 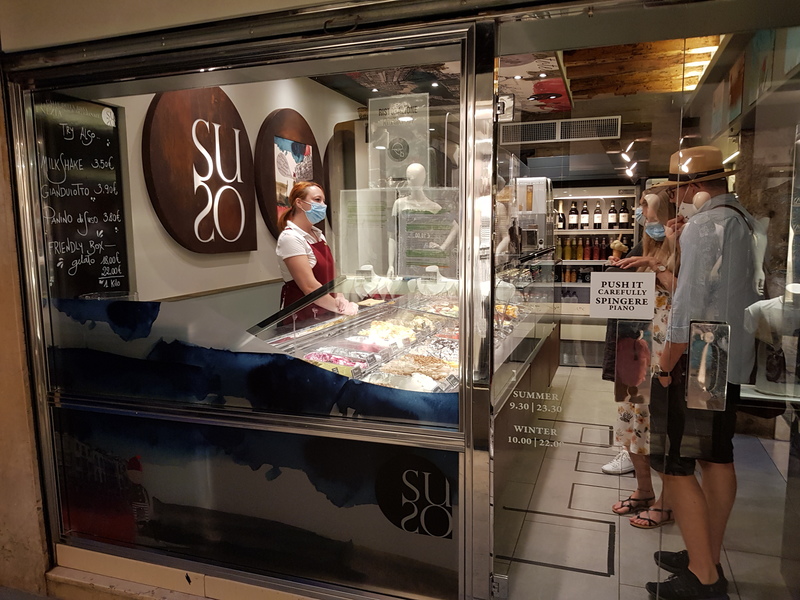 By far the most expensive and my favourite gelato place I tried in Venice. At €2.2 for a specialty flavour or €1.8 for a standard flavour, the price per scoop means there's no advantage to sharing one cone with 2 scoops. Lucky the quality (and location right near Rialto bridge) makes up for it.

Dark chocolate was intense and not sweet. Manet was a mix of pistachio with salt crystals and chocolate hazelnut - lots of flavours and good mix.

I went the next day for a midday gelato and tried the unadulterated pistachio which was potent and had little pieces of nut - outstanding. Noce & fichi seemed to have minimal hazelnut but caramelized fig pieces made it sweet and dark. Really good. 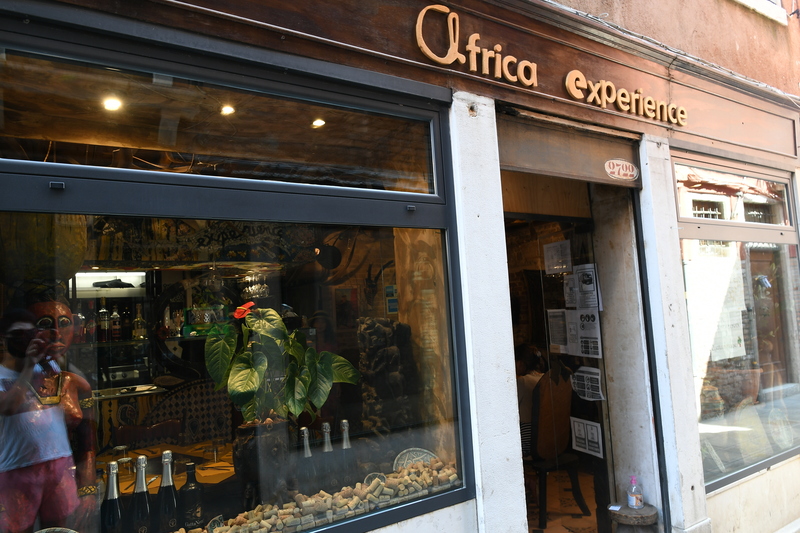 It may seem unusual to try African food in Venice - after a few days of typical Italian foods, I was keen to try something different only because the (Google) ratings were so high. The staff are from Africa which lends a certain authenticity although maybe more authentic if they focused on one country. Nonetheless the menu was varied and interesting. The decor is also very cool with the outdoor area walls full of depictions.

- Antipasto misto - fortunately this is an African rather than an Italian antipasto, and consisted of a very good aubergine, runny hummus, nice yoghurt sauce, and slightly spicy salsa. It was served with a dense bread, kind of round corn bread, and a vegetable pastry like a pasty;
- Tagen (Egypt)(cuttlefish & prawns with vegetables) €10 - seafood was tender but very salty, the selected side of rice with broadbeans and dill was very nice;
- Mafe (Guinea)(beef with peanut sauce & vegetables) €10 - ok dish but could barely detect any peanuts. I did an odd thing and asked for injera as my side. At first they said I couldn't, then agreed, then brought me some thick bread instead. I told them that I had ordered the injera and which was then brought out soon after. Unfortunately it had been rolled up and the top was uncooked and therefore raw dough. It did have a sour taste at least (appropriately). And it cost €1.5 extra because even though a side is included with each main, they wouldn't allow me to have this one.

Overall it was a different meal and one I would go back again if I ever (unlikely) find myself in Venice for a long period of time. Just wouldn't get the injera.